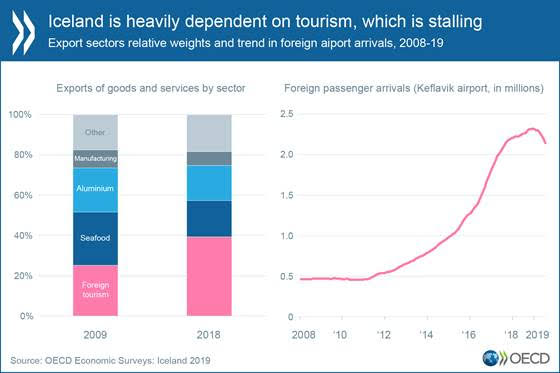 Sound macroeconomic policies and favourable external conditions have enabled Iceland’s economy to emerge stronger from a decade of post-crisis management. Yet the impact on growth from a drop in tourist arrivals and seafood exports underlines the need for reforms to open up and diversify the economy and improve its resiliency to sectoral shocks, according to the latest OECD Economic Survey of Iceland.

A lack of structural reform has left Iceland heavily dependent on volatile sectors, however. Tourism ballooned over the past decade, overtaking aluminium and fishing to account for 40% of export income and 10% of GDP, but has stalled since the insolvency of a low-cost Icelandic airline. Seafood exports are also down. After several years above 3%, the OECD projects Iceland’s GDP growth will drop to 0.2% in 2019 before rebounding to 2.2% in 2020.

“Iceland’s resurgence since the financial crisis to reach some of the highest living standards of OECD countries has been remarkable. It is a beautiful example of how a robust economy can co-exist with an egalitarian society,” said Mr Gurría. “However this slowdown shows that now is the time to go structural and to further open up the economy. Iceland should focus on reducing regulatory red tape and restrictions on foreign investment.”

Among Iceland’s structural challenges, competitiveness is declining as wages rise faster than productivity. The competitive edge gained after the 2008 crisis has vanished. Foreign direct investment is low, due in part to a high regulatory burden.

The Survey recommends reducing over-regulation, especially in services and for foreign investment, where restrictions are among the highest in the OECD, and lightening the administrative burden for start-ups. Iceland is already working with the OECD to improve its competition policy. Wage settlements across the economy should be in line with productivity growth, and fiscal prudence should be exercised through the current slowdown in order to further reduce the public debt.

In the tourism sector, the Survey suggests considering measures to improve sustainability given that – whether the downturn proves to be temporary or longer-lasting – Iceland is already at six foreign tourists a year for each resident and may already have reached a point where the negative social and environmental impacts exceed the economic benefits.

On public finances, the Survey notes that the contribution of public spending to growth has declined since the 2008 crisis. It recommends extending spending reviews to core policy areas like education and health care and applying more rigorous cost-benefit analysis to spending plans as two ways to improve the effectiveness of public investment.

The Survey also discusses the need to address a decline in high-school student performance and better match adult skills to the labour market. Iceland has a highly equitable education system and a large share of its workforce educated to tertiary level, but it could increase vocational training and make the education system more responsive to the labour market to avoid having people overqualified or possessing the wrong skills for jobs.

Newer PostNorthern lights season is upon us, top tips to find them and take a picture
Older PostMagic exists everywhere, I have seen it