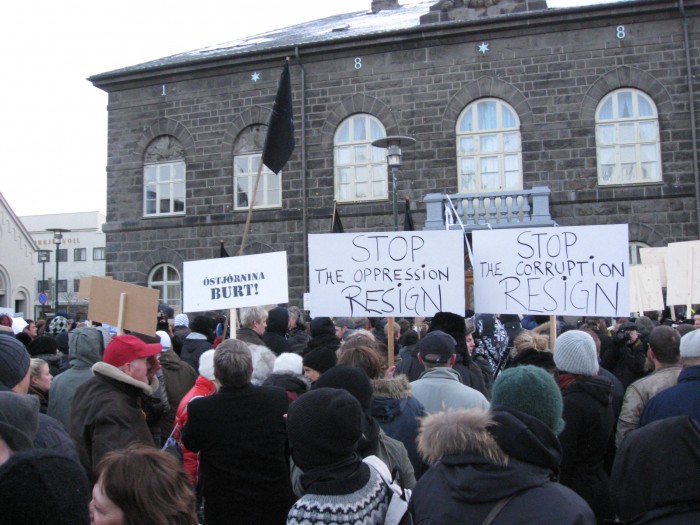 In the beginning of October 2008, the Icelandic Banking System collapsed in a matter of days, resulting in a national crisis, soaring unemployment, dozens of big corporations going bankrupt and an uprising of the people in Iceland leading to a change in government, capital controls and the parliament forming a Special Investigative Commission, and then a Special Prosecutor being appointed.

But what lead to the Bank Collapse? Some analysts trace it back to 2002 when two of the biggest national banks, Landsbankinn and Bunadarbanki (later Kaupthing), were privatised and sold to two different groups of Icelandic businessmen. The head of the privitisation board resigned, citing “poor working methods” during the sale, saying favourable offers for the banks were ignored and instead sold to political supporters. Others say that the collapse can be traced to a change in the framework of the taxing system in 2003 when corporate taxes were lowered and the regulatory system became less involved in what the banks were doing. Yet most agree that two factors played the biggest part in the bank collapse; the global financial crises bearing down on over-stretched and under-financed banks – and Icesave.

Icesave was a special savings account for Landsbankinn in the UK and the Netherlands, promising high interest rates and the initial success of Icesave prompted to other two big banks; Glitnir and Kaupthing, to follow suit. As it later became clear, Icesave never was a viable option and in the beginning of 2008 rumours started about the problems the Icelandic Banks had with cash flow, bad credit and shady trading habits.

In September 2008, it became clear that the banks were in trouble, Glitnir not in the least. It lead to a severe shortage of liquid assets leading to the decision by the government to nationalise the bank on september 29th. Within a week, all three of Iceland’s biggest banks had been nationalised and the Financial Supervisory Authority had gotten permission from the Parliament to overtake all financial institutions.

Weeks later the Icelandic government asked the International Monetary Fund for emergeny financial aid and in January 2009, after weeks of civil unrest and protest by thousands in the streets of the capital, Reykjavík, where the right wing government lost by a landslide.

In the aftermath, Parliament formed a Special Investigative Commission and then appointed a Special Prosecutor, which to this day is still investigating and prosecuting bankers, investors and various other individuals on suspicion of criminal actions in the period preceding, in connection with or in the wake of the collapse of the Icelandic banks.