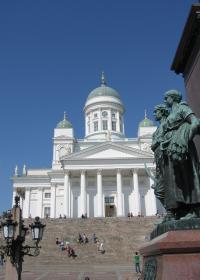 Figures just released by UBS reveal that Helsinki is among the top 10 most expensive cities in the world to live in, taking into consideration average prices versus average earnings.

The Finnish capital joins Oslo, Copenhagen and London as the some of the most ‘pension pinching’ cities in which to survive, pace 7th on the list. By contrast people in Zurich, which is equally expensive, have the most left over in their bank accounts at month end, according to the survey.

Locals had their own explanations for the startling fact.

“Well, you see the problem is that the government takes pretty much all of your money when you earn it,” said Ville 37, a manager in a software house. “Those goddamn socialists.”

“Well, I suppose that the price of living in Helsinki is quite high, but we had the Eurovision last year so that is why,” said Paivi, 22.

A UBS spokesman defended the figures, saying they were calculated in detail, and ‘certainly not worked out on the back of a beer mat’.