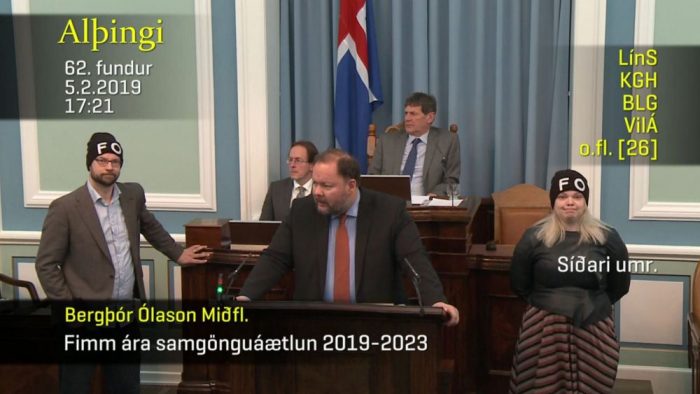 Following the Klaustur recording scandal, the return of Bergþór and Gunnar Bragi Sveinsson to Alþingi two weeks ago has made waves with multiple protests being held since the original event, this was fuelled further after Bergþór continued as chair to Alþingi’s transportation and environment standing committee, MPs on the committee were split when they voted whether or not to remove him as chair.

On Tuesday two Píratar (the Pirate Party), Björn Leví Gunnarsson and Þórhildur Sunna Ævarsdóttir, stood either side of the podium at Alþingi whilst Bergþór was speaking about the five-year transportation plan – the two were wearing the “Fokk Ofbeldi” hats (also known as FO hats) in their silent protest, Bergþór did not notice the pair behind him at the time.

The FO hats are sold for UN Women are anti-abuse/violence, the word Ofbeldi translates as ‘abuse’ and Fokk is a slang loose-translation of an English word of similar sound when spoken. The UN Women website has added: “By purchasing a Fokk Ofbeldi hat, you are participating in the lighting up of darkness felt by the women and girls who have had to suffer abuse, as well as literally brightening up the darkness of the short days in Iceland during February.”