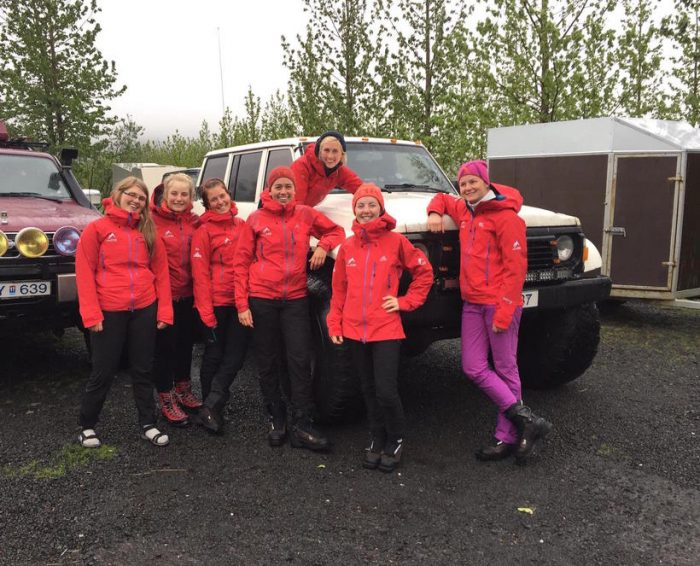 A group of seven Icelandic women are currently crossing Europe’s biggest Icecap, Vatnajökull glacier. This is the first time a group of women make such an endeavor according to Morgunbladid. All of them are experienced mountaineers working with the tour company Icelandic Mountaineers (ÍFLM) and all have  been working as guides on the glacier for the past few years. The group has become known as “Wond­er Women” and consists of Elisa­bet Atla­dott­ir, Selma Bene­dikts­dott­ir, Elin Loa Bald­urs­dott­ir, Iris Ragn­ars­dott­ir Peder­sen, Tina Maria Hall­dors­dott­ir og Svan­hvit Helga Jo­hanns­dott­ir.

The expedition has attracted some attention, crossing the great Vatnajokul glacier is no small adventure. The women told Morgunbladid’s reporter that the thought of them being the first group consisting solely of women to venture the glacier never crossed their minds when they planed the tour, they simply love mountaineering, and Vatnajökull is worthy challenge being the largest ice cap in Iceland, and one of the largest in Europe. It’s actually the second largest glacier in Europe after Austfonna on Svalbard in Norway but, nevertheless, larger by volume. It is located in the south-east of the island, covering just over 8 percent of the country.

Mountaineer Vil­borg Arna Giss­ur­ar­dótt­ir famously reached the top of Mount Ev­erest last month, being the first Icelandic women to do so thus staking her claim as one of very few women to reach Everest’s top alone. Icelandic women seem to be proofing them self’s to be formidable mountaineers this summer.

The Wonder women are piers, ages 22-23 years old, which is considered young for a venture such as this. This is also the first time they go on such a long voyage together but they are a tight group of friends through their work with Icelandic Mountaineers, and used to hiking and working as a team. They were ferried across a expansive river and then driven as close to the edge of the icecap as possible. “We might have to walk the first stretch and carry our gear on our back or pull the sleds on the ground. We will start skiing as soon as it’s possible” Atladottir told the reporter on the morning of the voyage. They all pull a sort of sled holding their gear, tents, sleeping bags, fuel, food and utilities and specialized gear for hiking along with portable solar panels and communication gear.
The group estimates the whole expedition will take six days if everything goes according to plan. But they bring six to eight days worth of provisions in case of delay. “It is actually possible to stop and set up camp anywhere on the icecap, which makes simplifies the trip”, Atladottir informs. They will be able to make adjustments to their planed rout if needed. “We will simply take it one day at a time and adjust our sails according to the wind. She concludes.

Featured image was sent to Morgunbladid