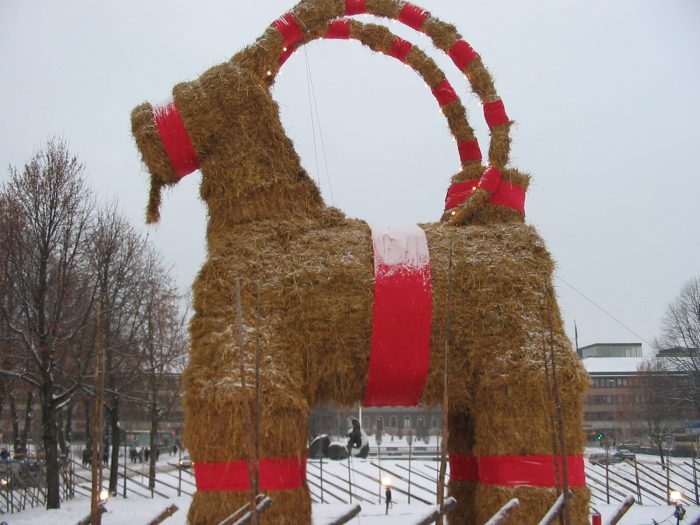 The Gävle Goat, otherwise known as the Christmas goat, or in Iceland mostly known as the IKEA goat, is erected annually by IKEA, in front of their outlet in Gardabaer, on the outskirts of the greater Reykjavik area.

It’s normally erected in the weeks leading up to Christmas and sadly it has also become a norm that it´s set afire. When it hasn’t been set on fire, it´s been destroyed by the wind or the weather. It certainly doesn’t seem to have much luck on the windy island. It was erected this year for the seven consecutive year and last night it was set ablaze once more.

The goat burned to cinders last night, it was reported to the fire department around four o’clock this morning. The arsonists how ever were promptly caught this year. The quick wits of a security guard on the scene lead to the three perpetrators incarceration and they will be charged tomorrow. They had thrown some sort of Molotov cocktail at the goat followed by the pouring of inflammable liquates that made sure that the goat would burn completely down to ashes.

In the past “the goat has been set on fire twice before and twice it was blown away in a storm” According to a report by Monitor. “Last year it self-combusted due to faulty Christmas lights. This year, there is a new lighting system and an electric fence to keep away arsonists.” A video of the goat ablaze can be seen here.