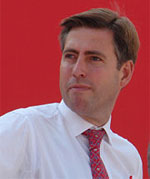 Gordon Brown reacted with this answer when Mr. Brady demanded compensation for the Christie Charity at a Parliamentary question time.

Icelandic Foreign Minister, Ossur Skarphedinsson, made a formal complaint on PM Brown’s comments today by calling the deputy British ambassador to a meeting and sending the Icelandic ambassador in the UK to 10 Downing Street this afternoon. Minister Skarphedinsson earlier today stresssed that Kaupthing, Singer and Friedlander Bank is a British Bank, under the regulatory authority of the UK Financial Supervisory Authority.

“We of course regret that the Christie hospital has suffered financially due to the seizure by the FSA of Kaupthing, Singer and Friedlander, but there is no basis for linking this matter to the Icelandic depositors’ compensation scheme”, said the Minister.

An IMF spokesman has denied all talks with the British Government.