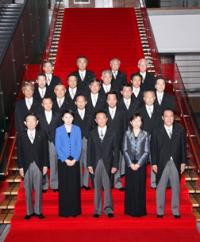 Reuters reports that according to Japan’s finance minister Shoichi Nakagawa Japan is ready to back up a bail-out plan for the struggling economies of the European nations, starting in Iceland. “With nearly USD 1 trillion in foreign exchange reserves, Japan is prepared to help bail out nations running out of funds amid the worsening global financial crisis,” Mr. Shoichi Nakagawa said.

According to the Wall Street Journal, “Such a move would send a lifeline to countries like Iceland, where the government’s efforts to bail out the country’s three biggest banks has pushed the small nation to the edge of bankruptcy.”

“We are going to take whatever steps are needed in order to deal with every possibility that could further hurt market conditions,” Mr. Nakagawa told reporters.

Japan is to propose a bailout fund at the G7 meeting taking place in Washington. They question for Iceland is what conditions IMF will set for the loan to the country and according to Japan the main conditions will be that countries getting a loan will need to provide the IMF a plan of how the economy will be restored.

The Icelandic PM stresses that there has been no decision on applying to the International Monetary Fund.