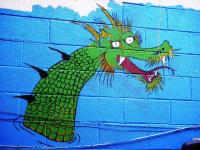 Sweden’s equivalent of the Loch Ness Monster, the Storsjoodjuret or Great Lake sea monster, has apparently been captured on film by Swedish hunters. The images may be blurry, but they clearly show a very long and narrow creature moving along the surface of Sweden’s Great Lake, known as Storsjon, The Telegraph reports.

Svergies Television had cameras positioned along the shores of the lake for weeks in a bid to capture a rare image of this elusive mythical creature. They may have hit the jackpot with these latest images. “It clearly shows that it’s warm and is made up of cells, otherwise our (heat sensor) cameras wouldn’t indicate red, so it can be a sea snake or some other kind of sea animal,” a member of the film crew reported.

Interest in finding conclusive evidence of the Storsjoodjuret has exploded lately as several international television stations have begun plans to place permanent cameras around the shore of Great Lake by the summer of 2009. The hunt is somewhat controversial, as the Swedish government itself tried and failed to list the Storsjoodjuret as an endangered species three years ago.

The Storsjoodjuret received its first printed mention in 1635, and since then some 500 people have reported sightings of the sea monster. Descriptions range from a three-headed serpent up to 30 metres long, to a creature with a dog’s head and fins that wails as it surfaces. Either way, this kind of quest is a pleasant diversion from the more depressing issues that currently preoccupy the world. The latest film footage certainly makes an interesting case for the existence of the Storsjoodjuret; but has yet to be authenticated.