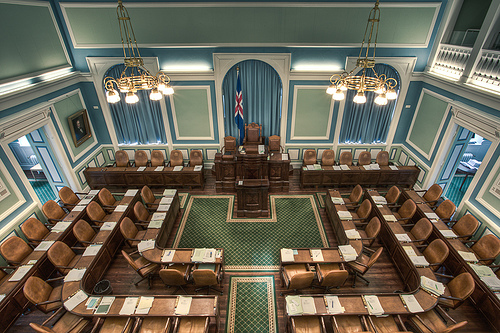 The Icelandic Pirate party excluded both ruling parties, the Independent party and the Progressive party, from a possible post-election coalition in a press conference earlier today. The parliamentary elections will be held early this year, on the 29 October. Usually they would be held in spring, the next one in spring 2017, but the protests this spring made loud demands for the current coalition in government to step down following the Panama Paper scandal resulting in the resignation of the prime minister and a promise of early elections. The winds in Icelandic politics shift swiftly  these days. According to the latest poll the Pirate party would have about 18% and the Independent party is back on top of the poll with 22% of the vote.

The Pirate party held a press conference today and announced radical pre-election move. They have proceeded to contact all the parties, save for the Independent and the Progressive parties, to formally start looking into grounds for collaborations and common policies. They announced there would never be a common ground with the two ruling parties and it would be impossible to hold true to their election promises and vision if collaborating with either of the two. They maintain this is the best way to proceed in a transparent manner, and for the voter to have an informed view of what they are voting for, to know what possible coalitions will be formed and thus lessen the likelihood of broken election promises. They see this as a way to motivate true democracy directly. Traditionally the majority of the vote dictates the formation of the coalitions, sometimes joining together parties that would normally be unlikely bedfellows. “If the coalition formation already taking place prier to election the voter is more informed” says Birgitta Jónsdóttir chairwoman of the Pirates and she also called it a “political impossibility” to be able to hold true to election promises if working with either parties. The response has been mixed, foreign minister Lilja Alfredsdottir (Progressive party) sais the rest of the parties are skeptical and Gudlaugur Thor Thordarsson (Indipenandt party) sais the Pirates have now unveiled themselves as a “left party”. Katrin Jakobsdottir chairwoman of the Left Green party told Visir’s reporter that they are of course open to meeting with all the parties in question. “If I have understood this correctly the Pirate party wants a meeting with each party separately, but I would like to stress the importance of everyone sitting at the table if any meetings are to be held” The response of the public is also mixed, but mostly positive on social media outlets.