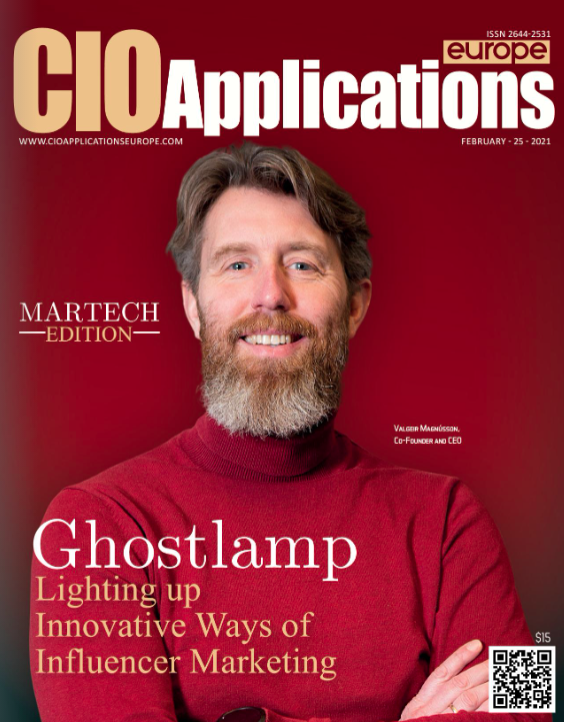 Marketing technology digital magazine CIO Applications recognizes Ghostlamp as one of the ten best service companies in marketing technology solutions in Europe. Ghostlamp CEO Valgeir Magnússon, who graces the cover of the latest issue, says in a conversation with the media that just like the genie in Aladdin’s lamp in A Thousand and One Nights, Ghostlamp helps marketers create the influential campaigns of their dreams.

Ghostlamp maintains a database with information on more than 50 million influencers worldwide and has developed a system which can automatically find, negotiate and pay influencers for their services.

In an interview with Icelandic paper Morgunblaðið Valgeir says that the company is in a constant state of growth and development and later this month the company will for the first time begin working with TikTok influencers. “It is a very exciting addition,” says Valgeir.

Valgeir says of the Ghostlamp search engine that searches for influencers around the world, “We know the extent of the reach of influencers and their followers demographics.”

The Ghostlamp system works in such a way that when a customer requests the services of influencers the company selects the right combination of influencers and sends them a collaboration offer. After reaching an agreement, the influencers mention the customer’s products in their social media posts.

When asked if influencers are always interested when Ghostlamp comes knocking, Valgeir says that of course not everyone is ready, but a large number of influencers are willing to work with the company. “It often depends on the product we are handling. We are working with small and medium-sized influencers and they are often wary and want to be consistent in what they present to others. They are not included unless it fits into their lifestyle. The big influencers have a different way because there is so much money in the game. They take on almost anything.”

As Valgeir explains, Ghostlamp doesn’t exclude beginner influencers who may have only a thousand followers. These are often ordinary people who do not necessarily see themselves as influencers yet, and many, for example, have never before been paid for their posts on social media. “People do not always recognize their own value.”

Ghostlamp operates mostly in the United States, but also in the Middle East, Latin America and Europe, according to Valgeir. “We are also just starting to test ourselves in Africa.”

Asked about the results of the campaigns, Valgeir says that the campaigns are usually successful, but on occasion this type of marketing isn’t suited for the products in question. “However, the customer will never be harmed because our offer is based on ensuring a certain response. If things go wrong, that’s our problem.”

The CIO Applications’ article highlights the example Ghostlamp’s successful campaign with American supermarket chain, Whole Foods. The company wanted to get influencers in the vicinity of all Whole Foods stores to promote Atlantic char. The influencers were asked to cook a meal from the char and post it on Instagram.

Read more about the case here.