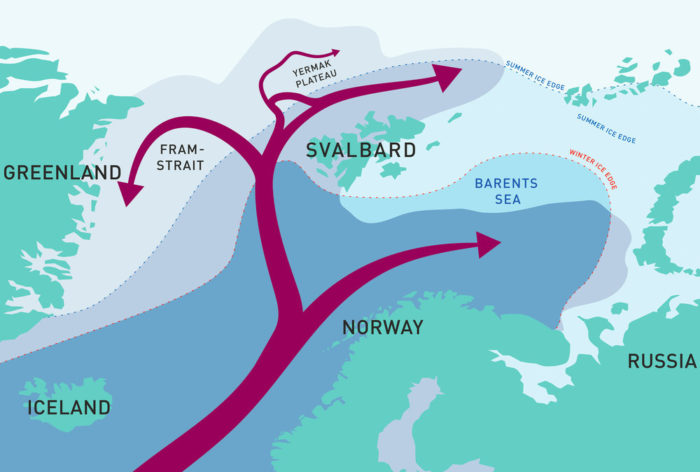 A distinct change has happened in recent years in the Barents Sea, around Svalbard (74° to 81° north latitude) showing a clear shift from Arctic climate to North Atlantic climate. The Arctic Ocean is warmest when the air in the Arctic gets colder and at the same time the sea ice north of Svalbard decreases.

Scientists from the Marine Research Institute of Norway and the Norwegian Polar Institute, working on a research program focusing on Sea Ice in the Arctic Ocean, have brought forth important findings on fundamental change in these high north waters, as the apparent influx of warmer Atlantic waters into the Arctic ocean is not only changing the physical environment with less ice forming, it is also bringing changes to the ecosystems of the Arctic Ocean.

Powerful pulses of water warmer than five degrees enter the area at the time of the year when the sea ice should freeze. But even if the air temperature is far below freezing, even during the months without the sun to warm the ground, new sea ice fails to appear.

This warm Atlantic influx brings nutrients with it which are necessary for the growth of phytoplankton and larger organisms such as copepods. This allows the fish which feed on such zooplankton to survive farther north.