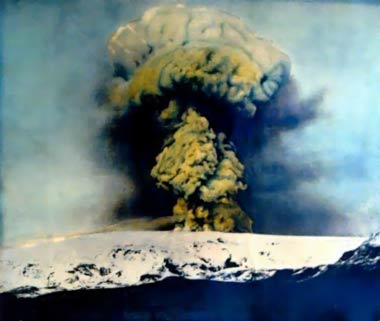 Katla volcano has been a point of interest in recent weeks due to the release of a scientific paper revealing how much carbon dioxide is being produced by the volcano, studies for the paper were held in 2016 and 2017. Scientists continue to monitor activity at the volcano but currently believe the volcano is not about to erupt.

Katla is a volcano underneath Mýrdalsjökull glacier in south Iceland last erupting in 1918. The volcano´s eruptions have been recorded since settlement in Iceland over 1000 years ago – on average, the volcano erupts every 40-80 years. Monitoring volcanic activity under a glacier can be very difficult as glacial activity can damage equipment due to movement, scientists find difficulty in getting to the areas they wish to research, and volcanic activity can destabilize the ice making research of any kind especially dangerous.

The paper Globally significant CO2 emissions from Katla, a subglacial volcano in Iceland discusses the contribution of CO2 Katla has to the atmosphere (up to 5% of the volcanic emissions globally) but has been a focus of media attention in recent days, various scientists have been interviewed about what their study actually means

Dr Ilyinskaya has expressed her disappointment in some of the media she has been interviewed by over Facebook, feeling her words have been twisted or mistranslated and used without further fact checking.

Articles about Katla have used this information to discuss previous volcanic eruptions such as Eyjafjallajökull in 2010 that grounded all air traffic in Europe, comparing the eruption and claiming the risk of Katla’s ash cloud being three times bigger. The event in 2010 was an unusual occurrence that Katla would be unlikely to replicate. Some of the articles published have since been corrected.

Scientists state that they are unable to predict if Katla is about to erupt, at this stage monitoring activity of the volcano is key.