Icelandic Artist Haukur Halldorsson, sometimes known as the Hawk has made some rather unusual and unique ceramic chess pieces based in Greenlandic customs. The Tupilaq tradition from Greenland inspires the pieces; carved entities in Greanlandic folklore made for a variety of reasons like protection, luck, for hunting and so on, the Tupilaqs were traditionally made in secret in isolated places and from perishable materials. Early European visitors to Greenland were understandably fascinated by the native legend and eager to see what Tupilaqs looked like so the Inuit people began to carve representations of them in more durable material like the sperm whale teeth or bone.

The Icelandic artist has taken inspiration from some key figures and made into beautiful ceramic pieces with the King and Queen represented by Sedna, the mother of seals and marine beings and Korngasuk, master of weather, whales and seals and probably the most powerful supernatural being by the Inuit people according to the artist. Tronarssuk, the spirit of the polar bear, represents the rook and the Bishop is the shaman, the gender fluid Samassuq who could travel long distances. The knight becomes Pukiman, the spirit of the caribou and the fox and the pawns are the Unga or the Ungaq, the little ones, the subaquatic Shepard for the sea queen Sedna.

Halldorsson fell for the charm of the Tupilaqs on his travels to Greenland many years ago when he stayed in Sisimiut. The Tupilaq entities stayed with him but he hasn’t directly worked with them as an inspiration until now. In form they are perfect for chess pieces and it also seems fitting since Icelanders and Greenlanders have regular friendly matches of chess trough the chess club Hrókurinn. ”It took a while for me to develop a way to make them suitably, I tried a few different approaches but finally I carved them out in gips, and made a cast, the final product is made in ceramic in a ceramic workshop called Friesentöpferei with the help of Giesela Rerup og Jens Mass who run the workshop, just across the border in Niebül, Germany.” The artist goes on to explain “ we’re not going to be able to make many sets and we will make them by order, each set is unique. They are costly to make but I am very happy with the result. I have long wanted to pay my tribute to the wonderful and amazing folklore of Greenland.” Halldorsson say s, but the subject matter that has long captivated his practise has been Nordic and North-European folklore and mythology. 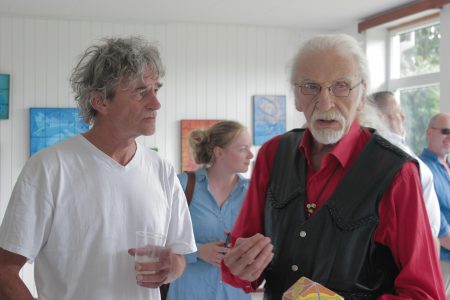 So far only three sets of chess pieces have been made, one is on display in the Danish town of Tønder, where the artist currently recites, one is with the Viking Circle and one is on its way to Greenland where Hrókurinn chess club will auction it off in a last effort to support the towns hit by the natural disaster that devastated Greenland’s West and North-West coast when it was hit by a tsunami in June caused by a huge landslide following an earthquake in the area. Over 35 millions Iskr have been gathered in an effort called Vinátta í verki which translates as Friendship in action, aimed to help rebuilt the communities hit by natural disaster in on 18 June.

The featured image shows the blue chess pieces that are being auctioned out.

Newer PostSamlerhuset crafts the first commemorative medal in Fairmined Gold
Older PostNordic Magic according to an Icelandic Artist on display in Tønder, Denmark