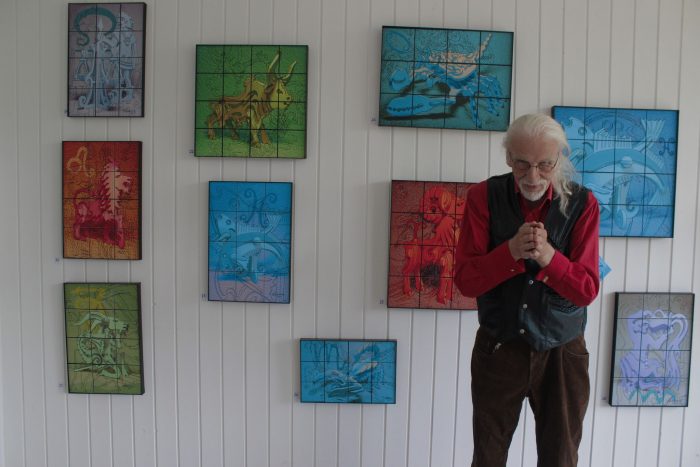 Icelandic pagan and folk artist Haukur Halldorsson allows the public some insight into his magical world of folklore and Nordic paganism this July in Tønder, Denmark where Gunnar Kristinsson and Claudia Pecenoni have organized an exhibition along with the artist in the newly opened Cultural Centre UBV6. The exhibition will be open through July and half of August from Thursday to Sunday and by appointment. The artist turned 80 in July and has been residing in the Danish town of Tønder for the last few years after living in Berlin for two years he relocated his atelier over the border into Denmark and has been well received by the warmhearted community of Tønder. 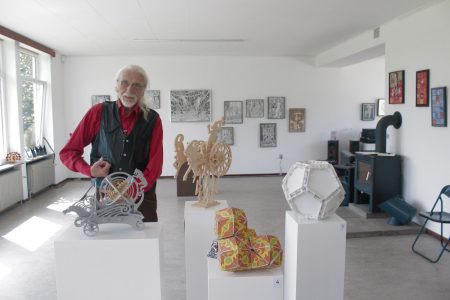 Some examples of models by the artist 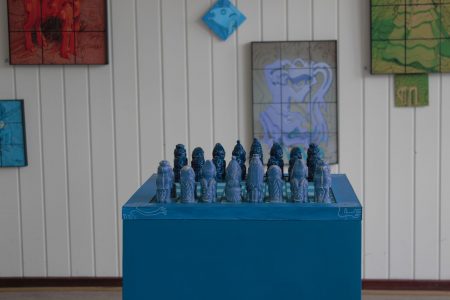 The Tupilaq chess pieces in blue

The display entitled “Nordic Magic” showcases Halldorsson’s most recent works and works in progress, most notably his ceramic Tupilaq Chess Pieces based on folklore from Greenland, the Tupilaq, small entities resembling totems carved out by the Greenlanders for generations in bone and stone. He also shows his almanacs, an astonishing work in progress and Halldorsson’s latest brainchild. Carved mythical beings, laser cut and assembled statuettes and models inspired by the Nordic Mythologies, the Greenlandic folklore and medieval European calendars and even from the cosmos, from astronomy and astrology. 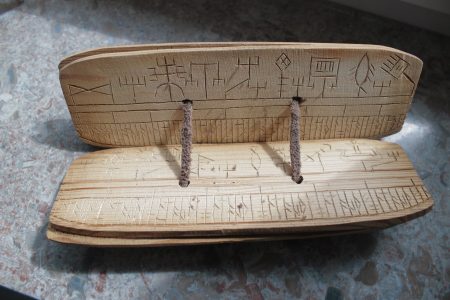 Prototype of the Prime Stave almanac according to Haukur Halldorsson

“I became fascinated by the way people in ancient time measured time and marked special occasions using the so called Prime Staves, wooden staves which divide the year into the four seasons with each day carved, marked for its own significance” Halldorsson told reporter the day after the opening in his courtyard in Tønder. “They marked the workings of the solar system, the sun and the moon as well as more down to earth events that directly effected them, their lives, their harvest, family and so on. These became beautiful carvings, varying between the countries of Europe and wider, you can find similar systems in China as well.” He added, when asked where he first came a cross the Prime Stave he explains that he saw them first in museums in France and in England, they are not in use anymore. “The only country to my knowledge that still make those traditional calendars and use them, mainly for ornament these days, are the Norwegians, they are still aware of the Prime Staves and still carve them out.” Halldorsson is working on drawings for each day, or a mark for each day. “There would be a mark for the Summer and Winter Solstice and the Spring and Autumn Equinox for example, and they use these to keep track of time, but also if, for example, a personal event took place; a farmer married his daughter away, the would mark the day, and that day would measure the anniversary of her marriage. So they kept track of time personally and practically, that’s one of the things that make these carvings so interesting”. Halldorsson is well underway with making a drawing for each day, 365 drawings with meticulous notations about each day’s significance in his trusted notebook. The almanac is a work in progress and so are many of Halldorsson’s ever evolving art pieces, but for now the public of Tønder and neighbouring towns are allowed a small glimpse into the artists immense creativity and imagination.