The past few days have seen a swarm of tremors around Katla volcano, but yesterday they reached over a 3 in magnitude or up to 3.6. According to reports quakes aren’t always signs of looming eruptions although the seismic activity has been frequent of late. The Icelandic Met Office is closely monitoring the volcano and surrounding area.

Katla is a large subglacial volcano in southern Iceland. It’s been dormant under the Mydalsjokull glacier for almost 100 years, but it’s considered a very active volcano with twenty documented eruptions between 930 and 1918, with intervals of 13–95 years. 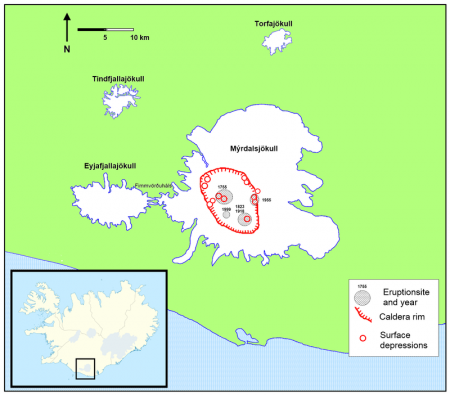 Katla hasn’t erupted forcefully since 1918, although there may have been small eruptions under the icecap that didn’t break the ice, including ones in 1955, 1999, and 2011. Prior eruptions have measured with a Volcanic Explosively Index of between VEI-4 and VEI-6 on a scale of 0 to 8. In comparison, the infamous 2010 Eyjafjallajokull eruption had a VEI-4. The last major eruption started on 12 October 1918 and lasted for 24 days. It was likely a VEI-5 level eruption.

Katla’s present dormancy is among the longest in known history and many theorize that the current seismic activity is a sure sign of a pending eruption although the Icelandic Met Office assures that there are no definite tell tale signs of a looming eruption.

Volcanologist Jon Friman speculates that the depth of some of the quakes indicates that fresh magma is making its way upward in the magma chamber. One of the quakes was measured on 14.4 km depth. Friman takes that as an indicator of the mountain getting ready to erupt, quakes on such a depth are caused by magma movement rather than movement in the earth’s crust. The greatest depth measured in this series of quakes is 25.5 km and the one closest to the surface was 0.1 km down.

The string of tremors can be observed online with updates of 60 seconds in 3D images in a program developed and made by Baering Gunnar Steinthorsson. The images display the size and depth of the quakes almost in real time. The colour coding for the age of the quakes is the same as the Icelandic Met Office uses, the newest are red, then orange, yellow, blue and the oldest ones are dark blue. The display is based on data from the Met office and it only displayed data which has been overviewed by a Volcanologist.

The 1918 eruption in Katla was major, lasting almost a month and resulting in extending the southern coast by 5 km due to lava flow deposits.