It looks like Icelandic football fans will make up about 25% of the audience in the stadiums where Iceland will be playing. The stadiums can seat from 12-14 thousand guests on average. “We have sold over 2000 tickets to the first two games and just under 2000 to the last game when we play against Austria” Thorvaldur Ingimundason with the Icelandic Football Union, KSÍ, told RUV’s reporter. He told that the sales through UEFA European Championship have been considerable but the KSÍ doesn’t have access to those numbers. There are still some tickets available on the UEFA website. “According to our information we haves sold most of the tickets from guest, the Dutch will likely outnumber the Icelandic fans on home turf. 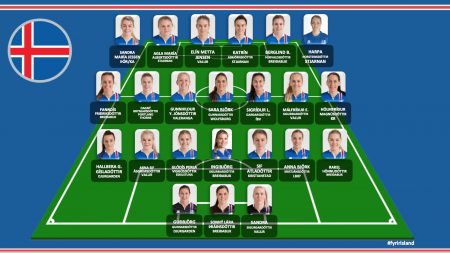 The first game of Iceland in the UEFA Women’s Champions League will take place on 18 July and will be streamed life for Icelanders on RUV. Coach Freyr Alexandersson announced the players this week and 23 have been chosen as the image above shows with 8 additional support players. The first game in July will be played against France in Tillburg, the second in Sviss in Doetinchen on 22 July and the last one against Austria in Rotterdam on 26 July.