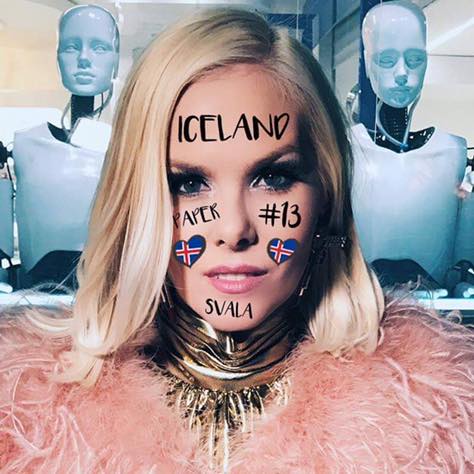 Yesterday evening the semi-finals were held and ten songs were elected to compete in the finals of the Eurovision Song Contest this coming Saturday. Svala and her team performed her song Paper and gave a great performance according to many disappointed fans that took to social media to voice their opinions about the semi-finals.

This is the third year in a row that Iceland doesn’t make it to the final in the Eurovision Song Contest, which is much loved among Icelanders. Iceland actually comes in fourth last when counting counties that have been voted out the most, with Malta, Cyprus and Portugal below. It’s none the less safe to say that the majority of the country keenly followed Svala’s progress and performance, hoping and believing that she would make it to the finals.

Svala told reporters that she thought she would be much sadder if she didn’t make it, but she felt good. She has made tons of friends, met some amazing people in the music industry of Europe and she added that she did her absolute best. She said it was an amazing experience to perform for millions of people and she has no regrets and leaves the contest with a thankful heart.

The performances from semi finals can bee seen here. In total 18 countries competed for ten places in the grand final and the ten qualifiers were Moldova with Hey Mamma by Sunstroke Project. Azerbaijan with Skeletons by Dihaj, Greece with This Is Love by Demy, Sweden with I Can’t Go On by Robin Bengtsson, Portugal with Amar Pelos Dois by Salvador Sobral, Poland with Flashlight by Kasia Mo?, Armenia with Fly With Me by Artsvik, Australia with Don’t Come Easy by Isaiah, Cyprus with Gravity by Hovig and Belgium wth City Lights by Blanche

The entries that missed missed their place in the Grand Final were Georgia with Keep The Faith by Tamara Gachechiladze, Albania with World by Lindita, Montenegro with Space by Slavko Kalezic, Finland with Blackbird by Norma John, Czech Republic with My Turn by Martina Bárta, Slovenia with On My Way by Omar Naber, Latvia with Line by Triana Park and Iceland with the song Paper by Svala.