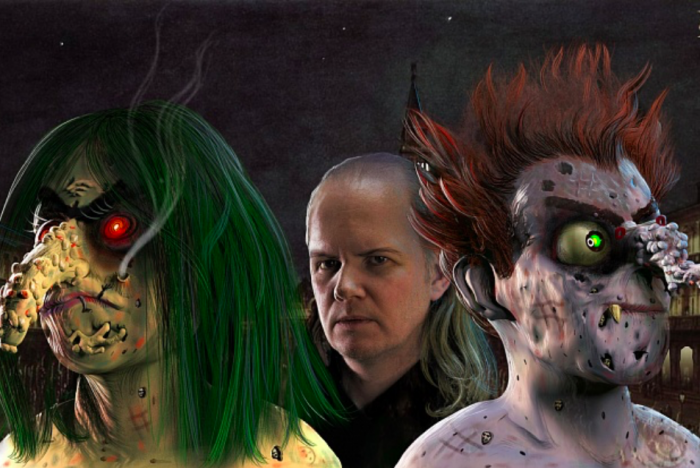 The Icelandic artist Egill Sæbjörnsson has employed to two fictional trolls to stage his exhibition in Iceland’s pavilion at the 57th Venice Biennale. Ugh and Bõögâr, the two trolls turned artists took over the creation of the Icelandic Pavilion from artist Egill Sæbjörnsson earlier this year. They are now in Venice, wreaking havoc and working for the installation of Out of Controll in Venice. The troll duo are Iceland’s contribution to the 57th International Art Exhibition – La Biennale di Venezia. 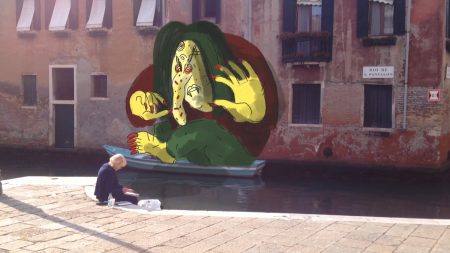 The lady painter on the canal_Out of Controll in Venice, 2017, Icelandic Pavilion at Biennale Arte 2017 – Courtesy the artist and i8 gallery

According to a press release from the Icelandic art Center, the trolls travelled to Venice by foot on Easter Sunday morning from Berlin, where they have been living and working in Sæbjörnsson’s studio in Berlin for the past year. Being shapeshifters, with the ability to instantaneously turn extraordinarily large, their journey to Venice only required 5 steps, taking them approximately 5 seconds.

Since their arrival, Ugh and Bõögâr have been exploring the city and getting to know its customs, including drinking over 100,000 cups of espresso. As (wo)man-eaters, they have been feasting on locals and tourists, mostly along the waterfront of Piazza San Marco, enjoying the views across the Grand Canal. With their recently discovered love for art, they have also been visiting the city’s many artistic attractions, including Damien Hirst’s exhibition “Treasure of the Wreck from the Unbelievable” at Punta della Dogana and Palazzo Grassi. Photos of their Venice adventures can be found here. Little is known about what Ugh and Bõögâr are presenting for the Icelandic Pavilion. However, they have been highly creative since they moved into Sæbjörnsson’s studio last year and their many creative pursuits – from music and perfume making to fashion and pottery. 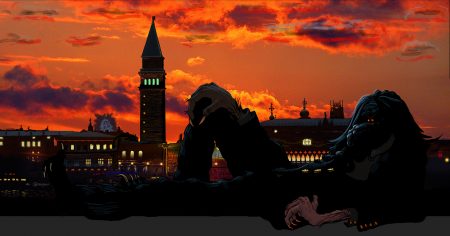 Out of Controll in Venice, 2017, Icelandic Pavilion at Biennale Arte 2017 – Courtesy the artist and i8 gallery

Speaking about her relationship with the trolls, Stefanie Böttcher, Director of Kunsthalle Mainz and curator of the Icelandic Pavilion, said:

“I first met Ugh and Bõögâr back in January, several months after they first moved into Sæbjörnsson’s studio. It was a huge surprise when the two 36-metre tall giants appeared in the inner courtyard of the Berlin high-rise building! They’re two seemingly tame monsters who remain completely unpredictable, who at any point could break out from behind their temporary friendly masks – like two exploding Icelandic volcanoes. They will always be two primeval forces of nature, but obviously I’ve also come to trust them over time and we’ve become pretty close. They would only eat me in an extreme emergency because they respect me to a certain extent.”

“But that doesn’t mean we don’t regularly cross swords: there’s a lot they don’t understand, but in order to get by in our world they have to accept certain boundaries and principles. And their principle of total chaos keeps on clashing with our system of structured order. But quite apart from that, Ugh and Bõögâr are literally overwhelming. There are no bounds to their thoughts and ideas. Even Sæbjörnsson, who believes that everything is connected, that art pervades life (and vice versa) and holds humanity together, that all boundaries are imaginary, even he is repeatedly surprised by the trolls’ tricks, brainwaves, and talents.”

Björg Stefánsdóttir, Director of the Icelandic Art Center, added: “In recent years, the Icelandic Pavilion has frequently been a venue for dissolving social constructs – whether they be ideologies, nationalist sentiments or the myth of the artist. This tradition has been taken to a whole new level with Out of Controll in Venice where all social constructs are annihilated as we let the unchecked creative powers of Ugh and Bõögâr take over.”

“As the installation of Ugh and Bõögâr’s work is about to begin, we hope that they will show the team from the Icelandic Art Center the same respect as they have so far shown their collaborators Egill Sæbjörnsson and Stefanie Böttcher and not eat anybody. What their culinary habits are outside of Spazio Punch on Giudecca, we unfortunately have no influence or control over.”

Here are some clues as to what to expect from the troll due in Venice judging from what they have been unto since arriving in the world of humans.
Music
Ugh and Bõögâr had never heard music before they came to live with Sæbjörnsson, but now they love everything from Black Sabbath to children’s music. Sæbjörnsson is a musician as well as an artist, so they have been working with him on a 13-track album, playing their own troll instrument, a huge wooden stick that they hit on the ground. It makes for a good bass line. They can occasionally also be heard howling as on this track which is released today.
Perfume
When Ugh and Bõögâr met renowned Berlin-based perfumer Geza Schön – a friend of Sæbjörnsson’s and the nose behind lines such as Escentric Molecules and Paper Passion – they became enthralled by the idea of creating a perfume that would capture the essence of being a troll and complement their repugnant smell. Perfumes are expensive to make – especially if like Ugh and Bõögâr you want to use specialist ingredients such as nuclear waste and whale puke – so together with Sæbjörnsson and Schön they have launched a crowdfunding campaign to raise money for the endeavour. As they present too much of a health and safety risk to humans, they can’t get a job to make the money needed themselves. And the Icelandic Art Center, Sæbjörnsson and his gallery, i8, have already spent all they have on the trolls.
Fashion
Ugh and Bõögâr love to dress up and walk down the street in human size.They like the attention that comes with it, with people staring at them puzzled, admiring their outfits while wondering about the large noses. Their unique style has even come to the attention of famous fashion houses and designers, including Eygló, winner of “Fashion Design of the Year” at the Reykjavík Grapevine Design Award 2016. Inspired by their look, she has decided to create a new collection that reflects the trolls’ aesthetics. Ugh and Bõögâr are so excited about this that they have asked her to put together a fashion show for the opening party of the Icelandic Pavilion.
Art
Ugh and Bõögâr have been making all kinds of art in Sæbjörnsson’s studio. They particularly like making sculptures. Given their very large size, one would think that they would be making very large sculptures. For a while they did, exhibiting their first works with i8 gallery on a lava field outside of Reykjavík as the pieces wouldn’t fit into the gallery. As their artistic practice has evolved, however, their creations have become smaller and smaller – perhaps because they have realised that to gain critical acclaim they have to make things that people can actually take in without having to get an aerial view from a helicopter or plane. Most recently they have been trying their hands (which they shrink to human size) at pottery, creating a set of cups with saucers in homage to coffee which they love to drink. For the Icelandic Pavilion they have said that they will return to large scale work.

Ügh and Bõögâr visiting ‘Treasures from the Wreck of the Unbelievable’_Out of Controll in Venice, 2017, Icelandic Pavilion at Biennale Arte 2017 – Courtesy the artist and i8 gallery