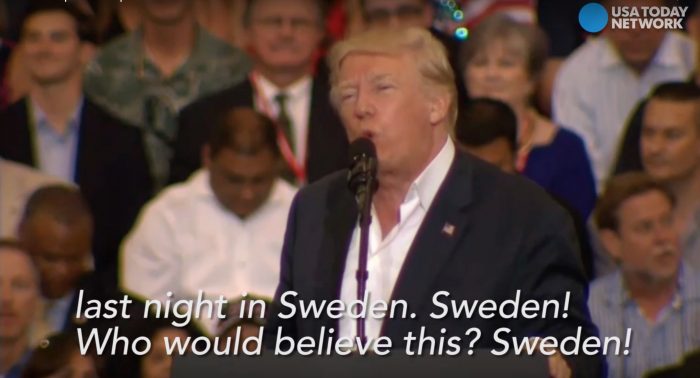 United states president Donald Trump proclaimed that he was referencing a news story when using alleged attacks in Sweden as an example of an apparently unsafe country at a rally in the state of Florida. “Here is the bottom line, we’ve got to keep our country safe, you look at what’s happening in Germany, and you look at what happened last night in Sweden.”

However nothing happened in Sweden, there was no attack, nothing took place out of the ordinary. The Swedish embassy in Washington has demanded explanations of the remark and social media in Sweden has been on fire, blasting the president for inciting fear of terror and fear of asylum seekers with made up stories. Former Foreign Minister Carl Bildt tweeted the following: 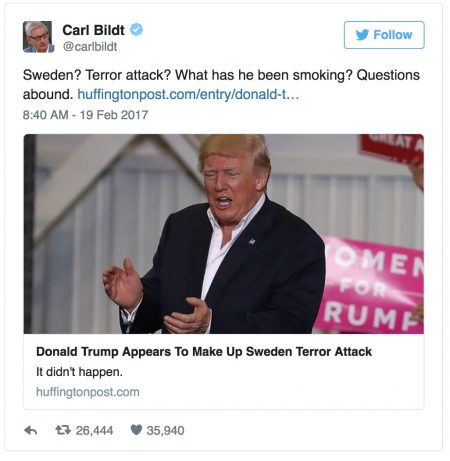 And the president tweeted that he was referencing a story on Fox News:

Sweden’s Prime Minister Stefan Lofven has since reacted to the comment commenting that while Sweden is certainly not a problem free country the government strives to meet the challenges they face in the best way they can. According to Visir news President Trump was referring to the story below, the story proclaims statistics about an increase in rape and “an incredible surge in violence” in Sweden because of asylum seekers:

Trump’s speech is here in part:

Since the speech this meme has been circulating on social media: 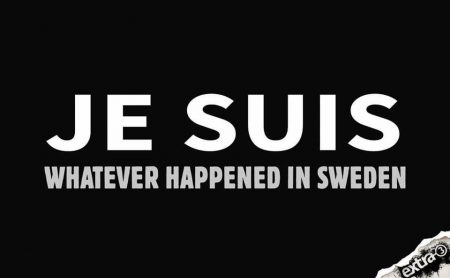