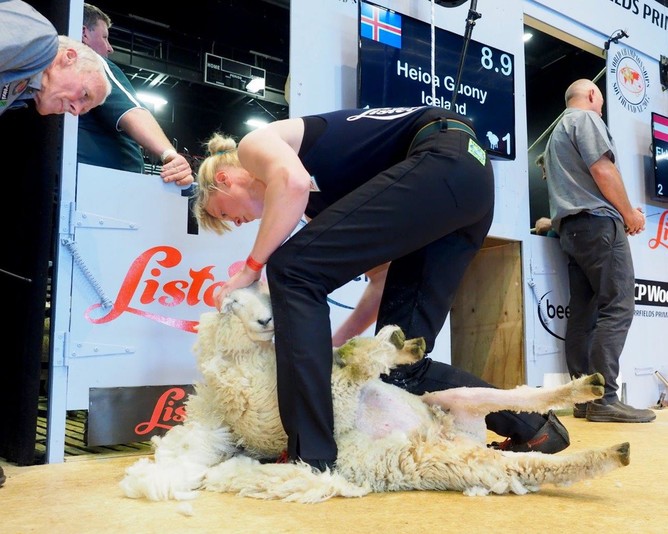 Two Icelanders are competing at the World Shearing and Woolhandling Championships in Invercargill, New Zeeland this year, and one of them is the only woman in the championship to compete in machine shearing according to RUV’s report.

The woman in question is Heida Gudny Asgeirsdottir, a 38 year old sheep farmer, farming for 15 years already, after taking over the her childhood farmland of 6460 hectares and 500 sheep farm Ljotarstadir when she was just 23.

Asgeirsdottir already has the attention of of the organizers of the championship, who wrote a specifically about her profile on their webside. Asgeirsdottir is a person that doesn’t fly under anyone’s radar, she’s a firm environmentalist campaigning against harnessing rivers in Iceland and against heavy industry exploiting nature. Asgeirsdottir’s history is quite the remarkable one and a book has already been published about her life views and her farming. Her farmland at Ljotarstadir is located just under the foothill of Katla volcano so Asgeirsdottir is no stranger to the forces of nature in Iceland nor to the hard work of managing a big farm on her own, despite her young age.

Her team partner from Iceland is Haflidi Saevarsson, they compete in three rounds and Saevarsson came in 35th and 42nd place in the first two rounds and Asgeirsdottir in the 52nd and the 53rd, she promptly pointed out that she won the woman’s league.

She remarks that she simply enjoys shearing. Shearing and sheep breading is somewhat different in New Zeeland than in Iceland. Asgeirsdottir informs that she visited New Zeeland in January for a preparation trip and in those few days she learned more about shearing than in the last five years. Their participation doesn’t come with any big rewards as she points out. The Icelandic team has paid their own way to New Zealand. “I was just crazy enough to go,” Asgeirsdottir said. “I just love shearing.”