Reykjavik is the most expensive capital to visit in Europe, if you look at average prices of a large local bear, a three course meal in an average restaurant, a night in a three star hotel and a taxi ride in cities like Oslo, Stockholm, Paris, Copenhagen, London, Dublin, Rome, Berlin and Barcelona. According to a recent report by the association of economy and entrepreneurs in Iceland; SA. The high prices on services for tourists in Iceland can be traced to the strengthening of the Icelandic Krona (IKR), and if this continues, Iceland might become too expensive, some would say it already is. “There are certain clues to suggest that we are more expensive that other capitals. In the wake of the 2008 crash Iceland became cheaper, especially in relationship to the Euro, because the Krona was weak. But prices have been climbing in recent years with the rising price inflation, but mostly because of the currency strengthening” according to a news report published by Frettabladid, quoting Ásdís Kristjánsdóttir, head SA’s economy department. 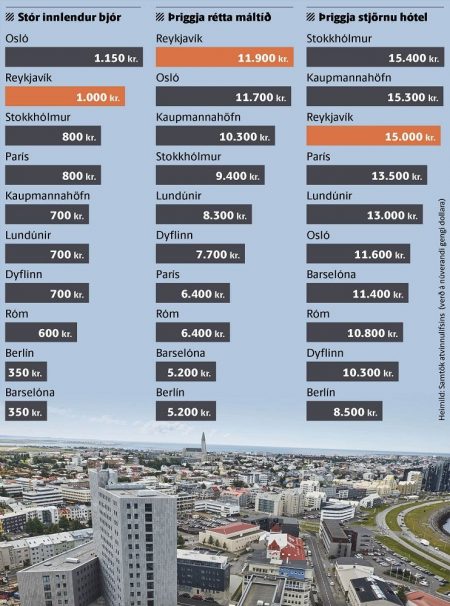 Image is taken from Frettabladid and shows the prices of local bear,a three course meal in a restaurant and a night in a three star hotel

„The most striking difference is in prices for services related to the tourist industry, such as hotels and restaurants. A few things factor in, firstly the travel industry needs considerable manpower and the cost of paying salary is high. Secondly the strengthening of the IKR in relationship to foreign currencies and thirdly there is lack of reserve in relationship with demand, especially in the capital area. Hotels and restaurants are more expensive now than they were before 2008, especially in the capital area. We are more expensive compared to the Eurozone and even compared to Norway in many cases”

According to a Travelsat report, the fourth most common reason for choosing a holiday destination was a good budged offer, or that the destination was a cheap one, so the price levels are sure to influence people when choosing a destination. Kristjánsdóttir estimates that Iceland can soon become too expensive and Iceland’s popularity as a destination will diminish as a result. “The continuing rise of the Krona will undermine the travel industry and prices will continue to climb. It becomes increasingly important that the quality of the service is in accordance with the high price tag or else the experience of our guests will simply be a negative one.”