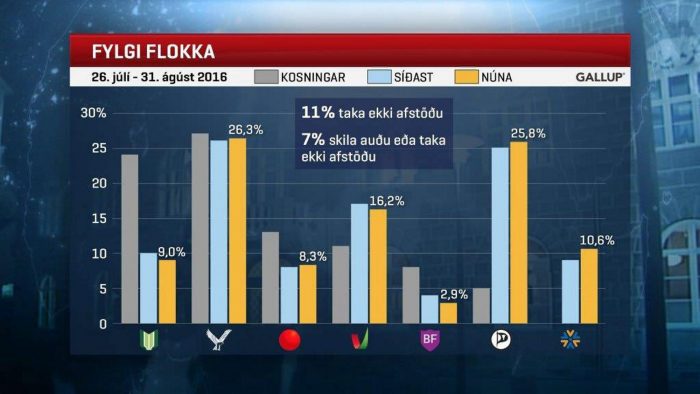 A Gallup survey, carried out from 26 July to 31 August, shows the independent party and the pirate party as the two would be ruling parties in government if Icelanders were to take to the polls now. The two parties are almost at an exact tie according to the survey, together they would have the sole possibility of forming a majority in congress. Bjarni Benediktsson chairman of the independent party and Birgitta Jonsdottir have both however, on separate occasions, said they would have no interest to form a government together, both citing irreconcilable differences of ideas and methods. The next Icelandic parliamentary elections were set to be held before 27 April 2017, but are expected to take place on 29 October 2016. The ruling coalition announced an early election following the 2016 Icelandic anti-government protests earlier in the year in the wake of the panama leak.

The Independent party has 26,3% support and Pirates 25,8%, 16,2% would vote for the left green, which is similar to previous findings, and the progressive party, which now forms a majority along with the independent party would have only 9% of the vote, a further 0.9% drop since the last poll, steady loosing voters since the panama paper scandal. Other parties are also under 10%.

The featured image is taken from a RUV report, and shows the findings of a survey taken in the whole of the country on the july 26 to 31 august 2016. The survey reached 5764 individuals, participation was 54.9% and participants were chosen at random.

Newer PostWild-girl Life, gets her name approved
Older PostA letter addressed to a farm in Iceland goes viral. Neither name nor address on envelope