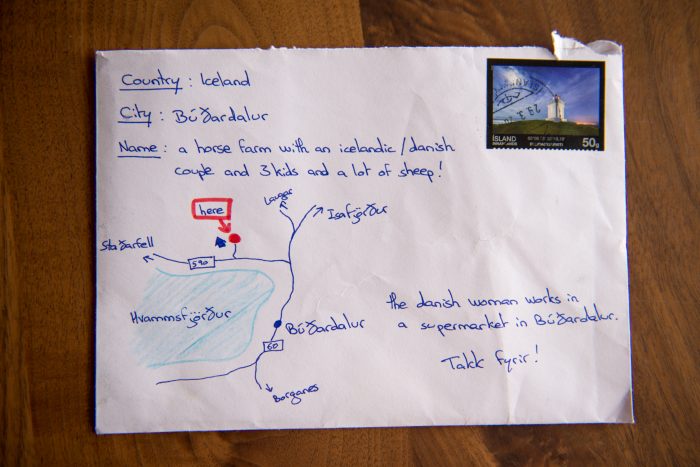 Rebecca Cathrine Kaad Ostenfeld, a farmer on Hólar farm in Hvammsveit country in north of Iceland received rather unusual letter in the mail in the end of Mars, which now seems to have gone viral with the BBC covering it in their trending news.

The farm had received some foreign guests early this year who wanted to send a postcard when they were back in Reykjavik, but didn’t know the address. On the envelope they wrote that the farm was located in Iceland, close to the town of Budardalur, and then they hand drew a map by memory, trying to pinpoint the location of the farm in the landscape. There was also a small text on the envelope explaining that that the farm belonged to a Danish – Icelandic couple with three kids, had horses and lots of sheep and that the woman worked in the supermarket in the town, Budardalur. They mailed the envelope in Reykjavik and weren’t quite sure if the card would be delivered, but said that if it were, “Iceland would proof itself to be the coolest country on the face of the earth, and that in Iceland, anything is possible” – at least the delivery of cards with hand drawn maps instead of an address.

Well, the unusual card found its way to it’s receiver in Mars, web outlet with local news, Skessuhorn, reported the delivery in May and since then the story has gone viral on social media after a photo of the envelope was posted on Reddit, according to the BBC article; “the picture prompted readers to share other miraculous postal stories; such as the tale of the Christmas card sent from Germany, which somehow arrived at the right place despite only being addressed to “England”.”

Featured image shows the envelope, taken by Steina Matt and published in Skessuhorn