A sociable sheep has been hanging out by the hot river at Reykjadalur (Smokey Valley) in Hveragerði for the last few weeks. Its a good hour hike up to the river, it starts on a rather steep upward slope and one needs hiking boots to get up there, but its well worth it, its a cold spring river that is merged with a hot spring straight from under earth’s crust. The whole area is a geothermal hot zone.

The sheep seems to be making a good experience better. Visitors love her, and there are going to be a lot of selfies with the friendly ewe at the end of the summer. She’s the star of the summer, according Andrés Úlfarsson, owner of Iceland Activities travel, he visits the area almost daily Morgunblaðið reports. People are able to get a picture of themselves with the Icelandic sheep as a willing subject, and that’s priceless, he laughs. The sheep has been there for most of the summer but its not going to last, he adds. She was most likely raised as at home, and has come to expect good things from humans as a “heimalingur”. Normally he Icelandic sheep shies away from humans as they roam the mountains and nature over the summer months, this one however follows people around and enjoys their company. 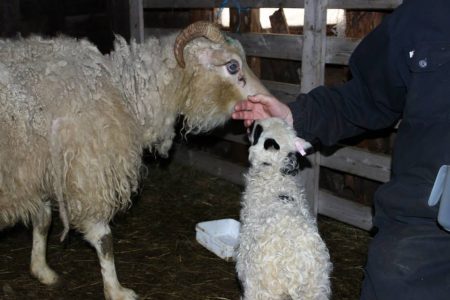 Heimalingur is an Icelandic term for a lamb that needs human intervention to survive. They are hand reared at the farm if all else fails. Farmers will try to get other ewes to nurse them and will try their best to assimilate the lamb to their flock, but sometimes that’s impossible, and those sheep become attached to humans and unafraid.

The Reykjadalur area is located north uphill from Hveragerði. Get informed in the tourist office where maps with marked trails and distances are available. The trail leads towards a highly thermal area with plenty of steam and hot water coming up through the ground. Beware, some springs and pools are really hot. After about an hour hike a bathable warm stream can be reached and you can enjoy a dip where hot springs join the stream. Wooden walkways have been built around the riverbanks to protect it as the visitor numbers in Reykjadalur is rising, its a very manageable hike and varied in terms of landscape nature.

A video of the friendly sheep on the trail to the river, by Youtube user Ann Padley