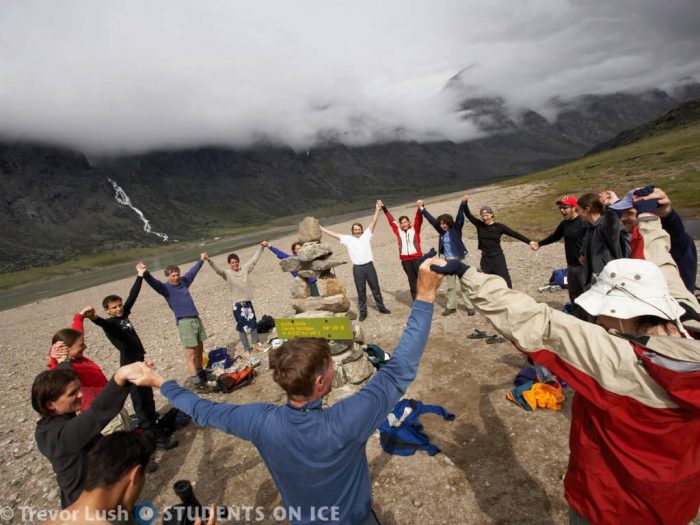 Three Greenlandic students are among only 120 students from around the world currently exploring the Arctic with Students on Ice as part of an educational initiative to connect youth to the challenges facing the Arctic and inspire them as leaders in their communities and countries. They are Linda Kristiansen, Nuuk, Gia Lundblad, Sisimiut and Pilunnguaq Karlsen, Upernavik.

The expedition is on a two-week ship and land-based journey exploring Canada’s eastern Arctic and Western Greenland. They have completed their time in the Torngat Mountains National Park in northern Labrador and cruising among the icebergs off of the coast of Baffin Island and the expedition is now exploring Western Greenland and helping to share their culture and home with a team of international students.

The expedition dates are July 21 – August 5, 2016. Guided by a team of scientists, elders, artists and polar explorers, these students are developing a deeper connection to the land, culture and people of the Arctic as they engage in hands-on research, listen to elders, visit remote Arctic communities, observe wildlife, and bridge cultures and understanding with youth from around the world. They are learning first-hand about the impacts of climate change, the importance of ocean conservation, and other important topics, grounded in an understanding and appreciation for the people who call the Arctic home.

Since Students on Ice (SOI) began 16 years ago, more than 2,500 students and educators from 52 countries have participated in SOI’s life-changing journeys. They form an alumni family that is connected by their experiences and provide on going support to fellow expeditioners to achieve their goals and become leaders in their communities and countries. Thanks to more than 40 generous public and private supporters, more than 80% of students are fully funded to participate in the Arctic Expedition including Linda, Gia and Pilunnguaq.

To learn more about the journey and follow the expedition through blogs, photos and videos please visit studentsonice.com Here are a couple of videos that feature a glimpse of the Arctic 2016 expedition experience to date: