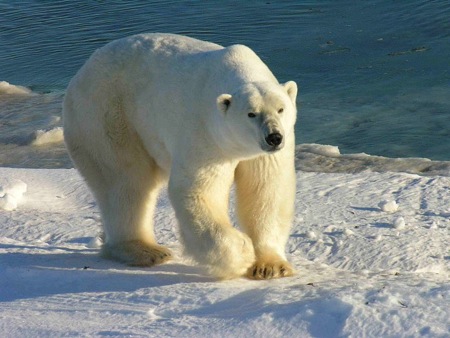 An adolescent female polar bear was killed with a gunshot wound to the neck by a farm not far from the town of Sauðárkrókur in north Iceland late last night. The animal was spotted by a farmer out horseback riding, he promptly notified the police who called a marksman. The farmer monitored the bear’s movements until the shooter arrived and shoot the animal when it got within 500 meters of an inhabited farm. The farmer also notified and warned neighboring farms.

The animal likely found its way to the island partly by swimming long distance and partly drifting on an iceberg. Official protocol in Iceland demands that polar bears are shot if they wander to close to human habitat when they come ashore in Iceland, and are deemed to be a threat to livestock or even people. Sadly the result is that they are always shoot if they are discovered. However bears swimming in the sea or sighted on pack ice cannot be killed.

Iceland has records of polar beers wandering to the Iceland for the last thousand years, with laws on the subject dating back almost to the time of the first settlements. The oldest reference to them dates from 890 A.D., when a settler captured a female and her two cubs alive and sent them as a gift to the king of Norway. Icelandic records document more almost 300 bear sightings since settlement, involving around 600 animals, though remains found on the island suggest polar bears were visiting since 13,000 years ago. However the visits seem to be more frequent in recent years, with two bears wandering to Iceland in 2008, both shoot dead, this is the fifth polar bear to be shot in Iceland since 2008