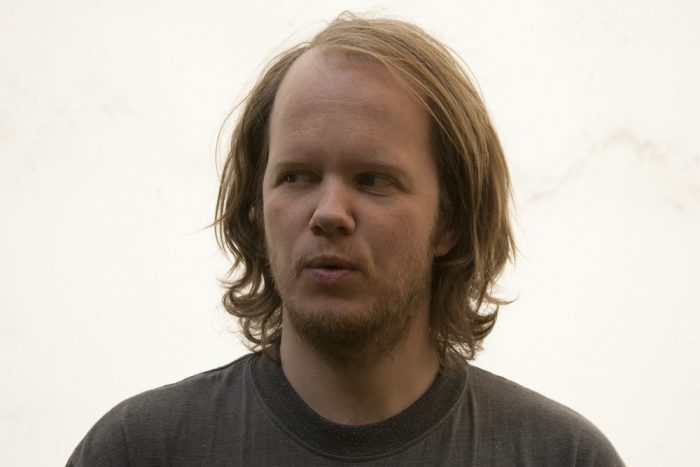 Artist Egill Sæbjörnsson has been selected to represent Iceland at the 57th Venice Biennale in 2017, the pavilion will be curated by Stefanie Böttcher. Egill Sæbjörnsson is a visual artist, performer, musician and composer. His works often consist of combinations of real objects, the illusion and magic of projected video and sound. New technologies, performance and music play an integral role in his pieces as well. Egill is witty, ingenious and deep, all in one. He makes us confused and surprised and leads us to pose ontological questions, doing so in an enjoyable way. Sæbjörnsson’s works are of an experiential nature, requiring neither instructions nor education in order to be understood. According to the jury: “The inventiveness and humor of Egill Sæbjörnsson’s project, as well as his ability to bring together divergent worlds through the use of different media and platforms to create an immersive environment where the real and concrete intersects with the imagined and the fantastic, will engage the audience of the Venice Biennale in 2017 and beyond with its layered sensorial universe and relevant reflections on our contemporary world.”

“I feel extremely honored by the choice of the jury. It is a immense challenge to curate the Icelandic Pavilion at the Venice Biennale, as it is one of the most important art exhibitions worldwide. I am very much looking forward to the project and I am convinced that the visitors will be totally captivated by experiencing Egill Sæbjörnsson’s work. Once they are in, they will become part of it .” Stefanie Böttcher said about the selection.

Egill Sæbjörnsson lives and works in Berlin and Reykjavik. Sæbjörnsson’s works and performances have been shown widely in Europe for example in The Hamburger Bahnhof – Museum for Contemporary Art in Berlin, Frankfurter Kunstverein, Kölnischer Kunstverein, The Baryshnikov Art Center in New York, Oi Futuro in Rio de Janeiro, PS1 MoMA, Kiasma Helsinki, Museum of Contemporary Art Australia in Sydney. Egill was nominated for the Carnegie Art Awards in 2010 and his works are in found in several private collections and museums. Recent public works are: Steinkugel, a permanent public art work for the Robert Koch Institute, Berlin and Cascade, an extended light installation for the Kunstmuseum Ahlen. In 2011 he collaborated with Marcia Moraes and Robert Wilson on a remake of Wilson’s Einstein on the Beach. Egill has furthermore published three books with his work and released five albums with his music. Egill Sæbjörnsson is represented by i8 Gallery Reykjavik and Hopstreet Gallery Brussels.

Stefanie Böttcher is an art historian and curator. Since June 2015 she is the Artistic Director of the Kunsthalle Mainz where she curated the exhibitions “On the Shoulders of Giants” and “Detail is all”. In 2014, Böttcher worked as a freelance author and curator in Germany and abroad, publishing essays on art as a site for utopia and on individual artists. At the Museum of Contemporary Art Vojvodina (MoCAV) she curated “Beauty Lies Inside Desire” with Halil Alt?ndere, Nathalie Djurberg, Klara Lidén and Agnieszka Polska. Previously she was the Artistic Director of Künstlerhaus Bremen for seven years. She curated the exhibition “8 Ways to overcome Time and Space” (with Una Popovi?) at the Museum of Contemporary Art Belgrade and the duo show “Transit” including the artists Korpys/Löffler and Christian Haake at manzara Istanbul. Böttcher has extensive experience in creating large-scale exhibitions and in accompanying artistic processes in concept and realization. She realized notable solo exhibitions with young international artists like Lara Almarcegui, Sofia Hultén, Ahmet Ö?üt or Kate?ina Šedá, and she has as well worked with artists such as Tim Etchells, Robert Kinmont and Icelandic artists, Hreinn Friðfinnsson and Ragnar Kjartansson.

The Icelandic Art Center is the commissioning body of the Icelandic Pavilion at the Venice Biennale.