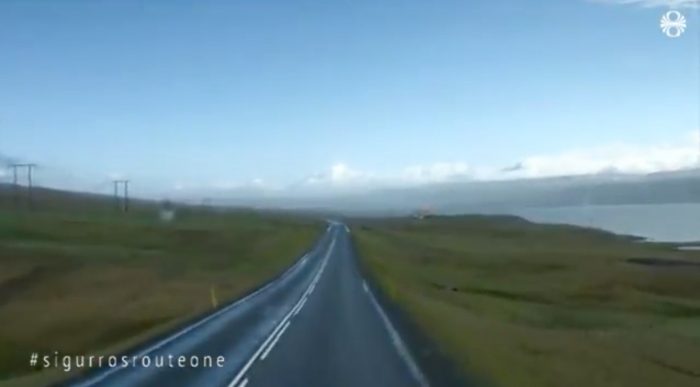 Throughout 24 hours between the 20th and the 21st of June, the longest day in Iceland with 24 hour sunlight, Icelandic band Sigur Rós made an unprecedented 24-hour ‘slow TV’ event live on Iceland’s national television and a global streaming live via YouTube – set to a continuously progressing soundtrack based around elements of a new song, Óveður (bad weather).

Continuing throughout the longest day of the year, ‘route one’ was a 1332 km journey the whole way round Iceland’s coastal ring road, broadcasting the trip live in its entirety, via national television channel RUV2. “In a day and age of instant gratification and everything moving so fast, we wanted to do the exact opposite,” says Sigur Rós’s Jónsi Birgisson according the band’s YouTube channel, were the whole event can be seen courtesy of the band. “slow tv is counter-active to the world we live in, in that it happens in real time and real slow.”

The video shows the view from a car driving anti-clockwise round the island, passing by and showcasing in the backdrop many of the country’s most notable landmarks including Vatnajökull, Europe’s largest ice-cap; the glacial lagoon, Jökulsárlón; as well as the east fjords and the desolate black sands of Möðrudalur. The hypnotic soundtrack to the journey was created via generative music software. The individual musical elements of unreleased song, and current Sigur Rós festival set opener, Óveður, are seeded through the evolving music app bronze, to create a unique ephemeral sonic experience. Headphones, external speakers and full-screen viewing are recommended on the band´s YouTube site.