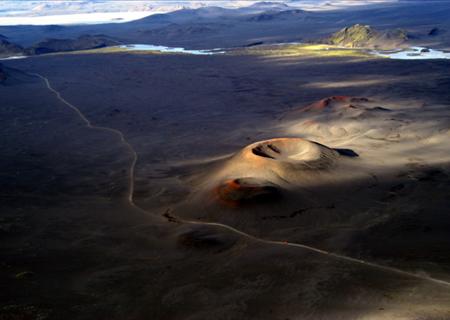 “Defense against the onslaught of tourism on the fragile nature of Iceland is without doubt the most urgent task at hand” according to Sveinn Runólfsson, chief of the Soil Conservation Service of Iceland (SCSI) and a veteran in the field. Runólfsson has been in the thick of nature preservation in Iceland for half a century and his father before him. In a recent interview with the national broadcasting service, Runólfsson has some important messages to Icelandic authorities, he is soon to retire after fifty years of conservation service. He adds that the ignorance of key people building the infrastructure of tourism and the people receiving of visitors in nature is great, and clearly mistakes have been made, for example building endless timber walkways around scenic spots is sometimes called “Bykoising” nature. Byko is a timber- and hardware store in Iceland.

There is knowledge in the field outside Iceland, for example in Scotland and Norway and much to learn he goes on, here there seems to be no possibility to fund responsible accumulative knowledge and professionalism in the field. Nature conservation is in shambles in Iceland, he says, except in reserved wilderness areas. He points to spring, the time of year when the soil is thawing for example; this is the most fragile time for the soil and imperative to protect it.

Runólfsson has faced a variety of urgencies in conservation in his time, from sand-seeding, desert reclamation to the battle to preserve the highlands from sheep and horse farmers, using wild nature as summer pastures, that is still going on, he says. „Today the interpretation of what is considered to be sustainable methods of land use is worlds apart between farmers and their spokespersons and then how scientists in the field interpret the term, and it is tremendously urgent to find common ground in interoperation of terms, this is the first step in collaborating on preserving the nature. And now he has seen the new frontier forming, our foreign guests and he urges people to pay attention before it’s to late.

The Soil Conservation Service of Iceland (SCSI) was founded in 1907. It is a governmental agency under the Ministry for the Environment. The main tasks of the SCSI include combating desertification, sand encroachment and other soil erosion, promotion of sustainable land use and reclamation and restoration of degraded land.