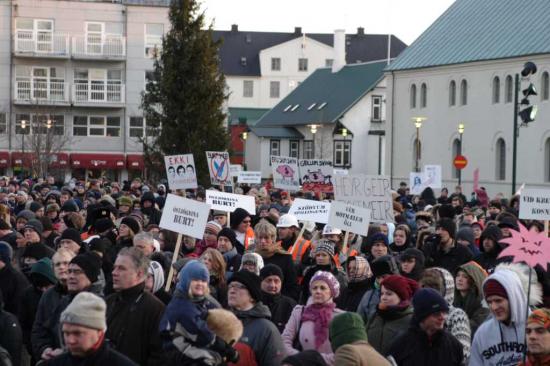 Around two thousand angry voters have pledged via Facebook to attend an anti-government demonstration when parliament comes together after the Easter-break today, they aim to pressure the government to step down and push for early elections. The protest is planned for 5-7pm on Monday.

This is adding to the government’s troubles in the face of a possible vote of no confidence, as the leaders of Iceland’s four opposition parties have already agreed to bring a resolution before the national parliament. Icelandic voters should see the suspension of parliament and early general elections, if the opposition parties succeed.

Monday´s protest outside the parliament building on Austurvöllur in Reykjavik is directed towards the two ruling parties, designed to pressure them to step down and call early general elections because of “grave cases of corruption” – Referring to the recent controversy and debate over hedge funds or vulture funds, and assets kept in tax havens used by the leader of the ruling party and his wife Two senior ministers have also been called out for their offshore assets, creating an “unprecedented situation of distrust in society” This is on top of the fact that over the past year polls have shown the government rapidly loosing majority support and the latest poll showing the Pirate party to enjoy enormous support, more so than both the ruling parties combined.

The event description for the demonstration also refers to the cases of corruption to which numerous MPs and ministers are allegedly linked, recently highlighted in the media sparking much controversy and anger among voters, the organizers of the protest conclude that its undemocratic for the current government to remain in power; “The government should respect the basic rules of democracy and stand down at once. We therefore demand elections now!”

(Image is from the 2008 protests in Austurvöllur)