While the recent reports of Mount Hekla’s activity this year “is greatly exaggerated” it is well worth directing some attention to the infamous volcano.

Mount Hekla is one of Iceland’s most active volcanoes and has a strong presence in the country. Her name is feminine, so she is referred to with a feminine pronounce, she has found her way into the imagination of her neighbors and visitors through history and there is still a legend that witches gather on Hekla for Easter.

The mountain became notorious after the eruption of 1104, stories spread through Europe by monks and travelers. The Cistercian monk Herbert of Clairvaux wrote in his De Miraculis, “The renowned fiery cauldron of Sicily, which men call Hell’s chimney … that cauldron is affirmed to be like a small furnace compared to this enormous inferno” (referring to Hekla). A poem by the monk Benedeit from around 1120 about the voyages of Saint Brendan mentions Hekla as the prison of Judas and the Flatey Book Annals wrote of the 1341 eruption that people saw large and small birds flying in the mountain’s fire which were taken to be souls. The most persistent story told that Hekla was the gateway to Hell, a belief that endured for approximately two hundred years, until the 1800´s, German scholar Caspar Peucer gave the myth wings when writing in the16th century that the Gates of Hell could be found in “the bottomless abyss of Hekla Fell”. 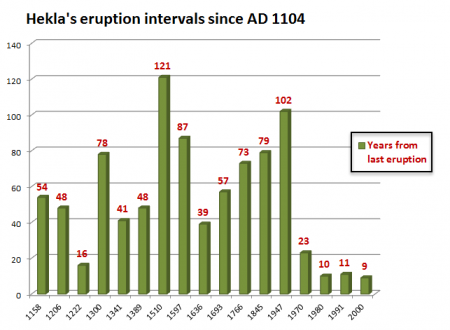 Mount Hekla sits in the south center of the island above Mýrdalsjökull glacier. She’s a strato-volcano, part of a volcanic ridge, 40 kilometres long. The most active part of the ridge is a fissure approximately 5.5 km long named Heklugjá or Hekla-canyon, considered to be the volcano Hekla proper. The canyon is active along its entire length during major eruptions and the lava flows from this fissure have contributed to the volcano’s elongated shape. Hekla stands 1,491 meters above sea level, just over a hundred kilometers east of the capital, at the eastern end of the island’s most extensive farming region. Her bigger and more ominous sister Katla sleeps under the glacier Mýrdalsjökull – One of the largest volcanoes in Iceland, when she goes off the world will probably feel it with a force, during her neighbor Eyjafjallajökull´s famous eruption in 2010 there was some speculation that it would set Katla of, but thankfully she remains dormant.