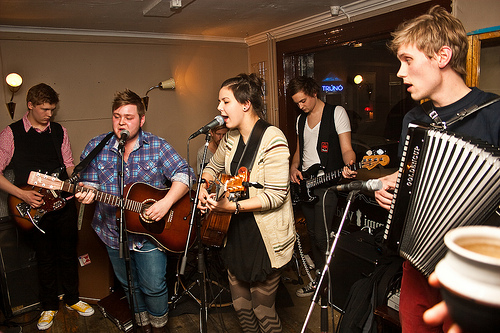 Icelandic band Of Monsters and Men took to iHeartRadio’s Honda Stage on Friday to perform a release gig for their new album, Beneath the Skin.

The event, which featured a special Q&A session, saw the band perform their latest hits from their hotly-anticipated album, which hit the shelves on 9 June.

The album – which is the follow-up to their platinum-selling debut, My Head is an Animal – was co-produced with Rich Costey in their homeland and LA and features the folk pop and thundering drumming the band has made its name for.

Fans have held on for four long years for the release of Beneath the Skin, but judging by the reception stateside, it will have been worth the wait.

Speaking about what made the second album different from the first, they explained that their debut was like a story while the new one was more personal. Singer Nanna revealed that the track King and Lionheart was about the relationship she had with her brother, describing it as a lullaby for her younger sibling.

Quizzed on the differing tones of their albums, Raggi and Nanna said that it was a “natural progression”, noting that they were all much more comfortable with each other these days so found it easier to write about more personal experiences.

They pointed out that recording some of the album in LA also had an effect, as the overall sound was different.