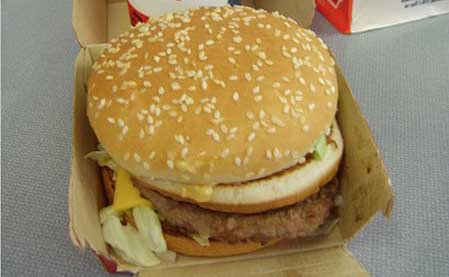 A hostel in the Icelandic capital Reykjavik is proudly displaying the country’s last ever burger and fries bought at McDonald’s.

A year after the catastrophic financial crash in 2008, McDonald’s closed its doors in Iceland for the last time. On 31 October, 2009, Reykjavik resident Hejortur Smarason purchased a burger and some fries from the fast-food chain, but rather than eat it, he chose to keep it and see if it decomposed over time.

He later explained that he had heard stories about food from McDonald’s never decaying so he decided to keep it in a plastic bag and conduct his own experiment.

After three years, he gave his meal to the National Museum of Iceland, which kept it on display until recently. However, when staff returned it to Smarason because they could no longer preserve it, rather than throw it out, he offered to his friends who run Reykjavik’s Bus Hostel, where it is now on display for guests to view.

The hostel has also set up a live webcam on the not-so-appetising meal, so anyone interested in watching it slowly decay can do so online. But as the hostel rightly points out, the burger was bought 1,921 days ago, so watching it rot and decay might require some patience.