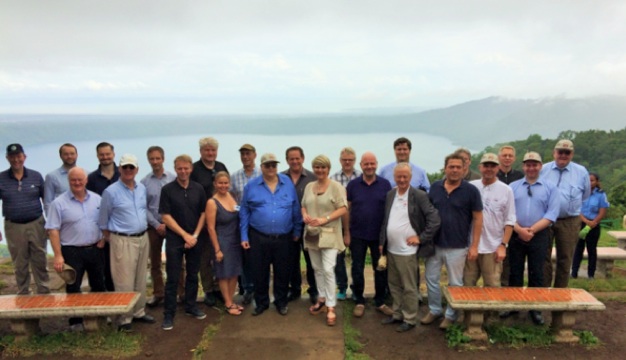 On November 18th 2014, a memorandum of understanding (MoU) was signed between Nicaragua, Iceland Geothermal Power S.A., an Iceland-based geothermal energy consortium, and ENEL for the development of a Geothermal Resource Park in the areas of Masaya, Apoyo and Mombacho, Nicaragua.

The signing ceremony was the conclusion of a large Icelandic delegation visit headed by Mrs. Ragnheidur Elin Arnadottir, Minister of Industries and Innovation. The delegation included government and private sector representatives from both the geothermal and hydroelectric sector in Iceland.

Mrs. Ragnheidur Elin Arnadottir, Minister of Industries and Innovation in Iceland, Dr. Paul Oquist, Minister-Private Secretary for National Policies, Mr. Ernesto Martínez Tiffer, CEO of ENEL, Mr. Albert Albertsson, Chairman of the Board of Iceland Geothermal, and the other representatives of the Icelandic companies.

Iceland is a leading country in the utilization and development of geothermal energy. The Icelandic approach of utilization of geothermal resources is unique in the world. Geothermal energy is not only used for electricity generation, but also in various direct applications, leading to secondary businesses like house heating, aquatic farming, methanol production, health clinic and skin care products, to mention only a few.