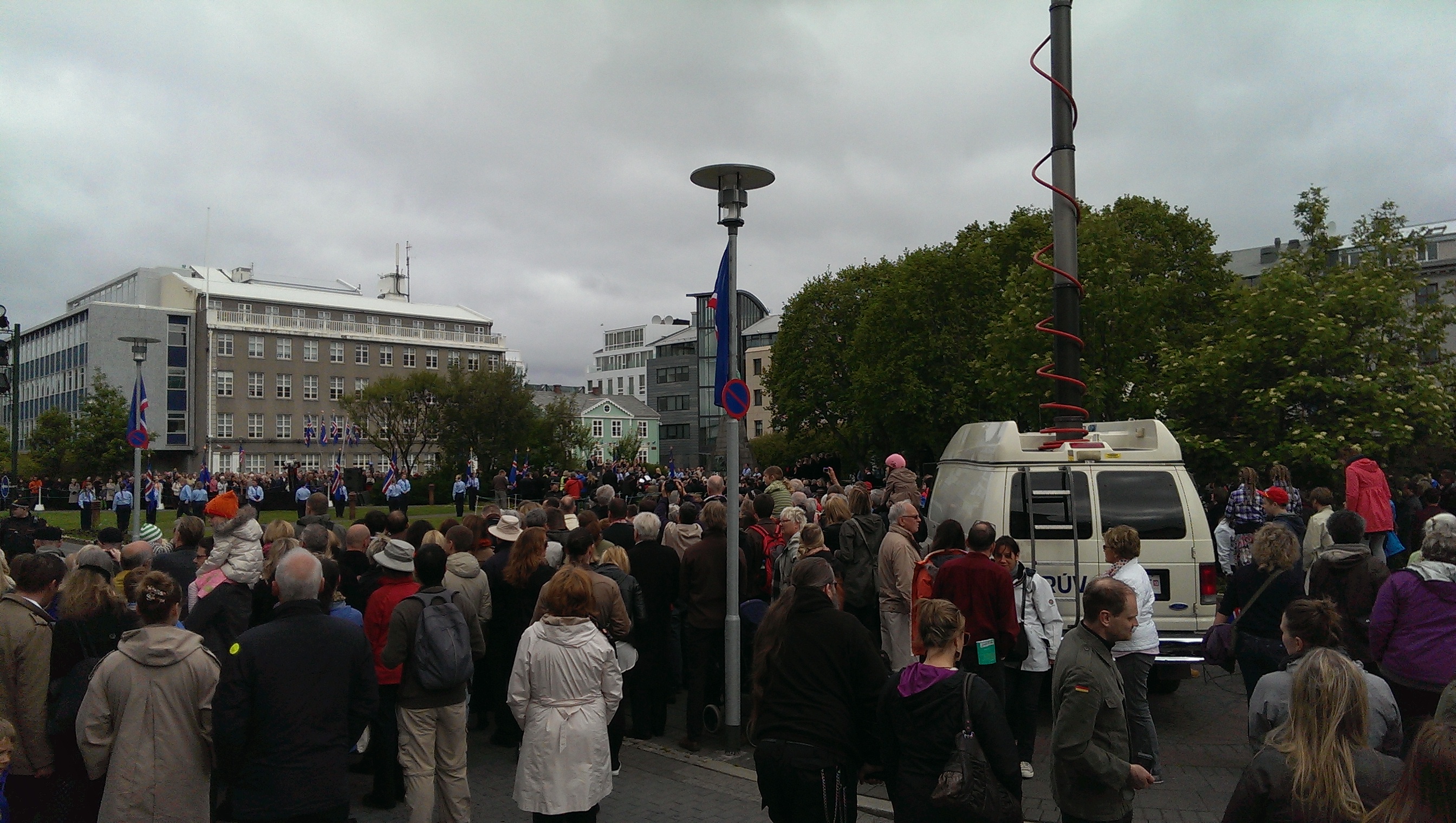 The speech of the Icelandic prime minster, Mr. Sigmundur David Gunnlaugsson’s, in whole

My fellow Icelanders, I welcome you here on our National Day

“Who has a fairer native land,  with mountains, dales, gleaming sand?”
– These words were written by Unnur Benediktsdóttir Bjarklind, who published under the nom-de-plume Hulda, on the occasion of the foundation of the Republic of Iceland in 1944.

This patriotic poem, which is so familiar to us, has been closely associated with our history ever since the foundation of the Republic. The poem celebrates independence, the beauty of our country, the Northern Lights (which are now a tourist attraction), peace and the Icelandic people, whom Hulda describes as upright, prosperous and wise. The author’s own story encapsulates the essence of Icelandic culture and reminds us how proud we should be of our history.

It is the story of a woman who grew up in Þingeyjarsýsla in the late 19th century and whose first schooling took the form of private teaching by her parents in good circumstances, with access to the library of the Þingeyjarsýsla Literary Society. It is a remarkable thing what great importance we Icelanders have always attached to our history and literature, often despite difficult conditions, so preserving our language and national culture. This was clearly seen, for example, among the Icelanders who emigrated to the New World in the late 19th century. Among the thousands of other immigrants to Canada and the northern United States, it was always noticed that the Icelanders were in a special position in terms of literacy and the priority they gave to education.

It is difficult to over-emphasise the importance of education for our tiny nation. Knowledge and skills are, and always will be, the basis on which we build our progress.

Icelanders have witnessed immense progress since the foundation of the Republic; progress that has been achieved through unified effort, progress that is based not least on know-how, optimism and the fact that the nation has had the courage needed to embark on programmes of long-term development.  Today we find ourselves facing both threats and inexhaustible opportunities. Inevitably, external conditions, economic and political, will have an effect on our standing and well-being. We have unique natural resources which, together with the geographical location of our country, offer a great potential. Our most valuable resource, however, lies in our people themselves.

Inventiveness is an inexhaustible source, with manifestations in all occupations, culture and the arts. Many Icelandic companies have developed unique products and services that are sold all over the world, and it is a great pleasure to see start-ups establish themselves and reap the attention they deserve internationally.

To be able to harness inventiveness and skills we must give attention to the structure of our educational system. In this it is of particular importance to consult parents, teachers and the social partners regarding the development of Iceland’s educational system with the prosperity and future of our people as a whole as our guide.

We must safeguard our social cohesion, and education plays an important role in this. Iceland has not been marked by class division in the same way as many other countries, and this is one of the many advantages of living here. But we cannot take it for granted that this will always be the case. For this reason we must be careful not to end up with two or three nations living in the same country.

In this connection we should think of the divide between the metropolitan area and the rest of the country. There are various indications that this divide is becoming deeper; this is a trend we must resist by taking steps to ensure a comparable quality of life, standard of living and access to services irrespective of where people live. We should strive to structure our public services so that they are open to all. In this, matters concerning people’s lives, health and safety must be given priority.

Social cohesion in Iceland is clearly displayed in times of crisis, and many things in our society attract attention and admiration abroad. Many people here do volunteer work selflessly and in the interests of us all, for example the scout rescue teams which, I think it is safe to say, are probably without parallel anywhere else in the world.

As a consequence of our history, we have little tolerance for injustice. In his book Íslensk menning (‘Icelandic Culture’), Sigurður Nordal tells the following story. “An old French historical source relates how a messenger was once sent to a band of Vikings who had drawn up a large fleet off the coast. He asked which of them was the leader of the band. They answered him, saying: ‘We are all equal’.”

Icelanders, as descendants of the Vikings, are highly individualistic and have difficulty putting up with authorities, let alone oppression. This was clearly demonstrated in the Icesave dispute, in which the people rejected an agreement it considered unfair. This position was later upheld by an international court, which showed that the people’s sense of justice was a reliable indicator to follow.

Without hesitation, Iceland took the view that the debts of the insolvent banks should not be imposed on the public, and was undaunted by threats from various quarters.  As a result, people across Europe look to Iceland as a model in the struggle with the consequences of the economic recession which many nations in Europe are now tackling.
They are watching to see what we are doing here, and we will strive to set them a good example.

We have created a many-faceted modern culture in Iceland, and while influences and styles from many places form part of the mix, with good results, the basis of our culture today still consists largely of our language. Whether, over the centuries, the nation was wreathed in flowers or choked in thorns, we never forgot to describe our plight and express our thoughts in words. The language is our permanent working material which preserves our storehouse of memories, our triumphs and sorrows, our hopes and our dreams.

But a lot of water has flowed under the bridge since Sigurður Nordal wrote those words about Icelandic culture. Iceland’s contribution to international culture has broadened and become more varied in the past few decades. In academic knowledge, culture, technology, industries and the arts, Icelanders have made their mark in the international arena.

Recent years have seen a growth in our awareness of the special position of Iceland’s natural environment in the global context.  The growing numbers of foreign visitors to Iceland bear witness to this. We should welcome them with open arms, not merely because they bring us foreign-currency earnings but because hospitality is an important part of our national culture. Travellers who return to their homes with good memories are also the best form of publicity for Iceland.
But this also brings us to one of the greatest challenges of the present time. What is the best way to preserve the extraordinary beauty of our country without putting excessive restrictions on our utilisation of its natural resources? We must proceed with caution here and strive to establish the broadest possible consensus about the balance that must reign.
Ladies and Gentlemen,
Today we commemorate the foundation of the Republic of Iceland in 1944. This day, which was also Jón Sigurðsson’s birthday, is an important part of our culture. On this day we join together in honouring the memory of those who in centuries past fought for our country’s freedom and our nation’s progress. We also recall the fact that freedom and democracy are still not within reach for millions of people in the world at large.
Every day you make achievements, great and small. Students who are graduating; farmers, many of whom went through an unusually difficult winter; fishermen harvesting an important natural resource; people who manage or work in companies of all types across the country; workers in the health services and the police, who ensure our health and safety; teachers and experts in the schools who see to the education of our children and the employees of companies and institutions who serve us on a daily basis with skill and dedication.
I should like to thank you, and indeed the whole nation, for your contribution. It is greatly appreciated. A community is a cooperative venture in which all jobs should be greatly appreciated and all citizens should enjoy equality of rights and scope. Iceland has such opportunities, resources and human talent that everyone should be able to live in prosperity.
Now begins summer and the period of longest daylight, a time of growth and enjoyment in our daily lives. I hope you all have an enjoyable summer, both in work and at play.
Ahead of us lie great challenges of various types which we must tackle as one man. It is my hope, and I believe, that in cooperation we will manage to take important and purposeful steps forward, achieving greater welfare for all the people of this country.
May the Icelandic people enjoy prosperity in the days to come.
“With steaming springs and bracing breeze,
Majestic glaciers, azure seas,
To thrive, upright, enlightened, wise and free –
By furthest ocean’s rim.”

Let us celebrate our National Day together.