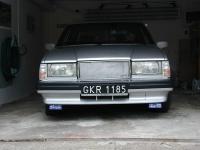 The Local newspaper has reported that a man from the town of Boras in western Sweden has been arrested for unlawful drunk driving. But what makes this common violation so shocking is that it is the 150th time the man has been convicted of driving drunk. Even worse, this time he was charged with driving under the influence of drugs as well.

The 42 year-old man is well-known in the Boras area, but police were unable to keep him in custody because his charges are not jail-worthy under Swedish law. He was released from police custody despite failing the test that confirmed he was indeed under the influence of drugs and alcohol.

Speaking to The Local newspaper Boras Tidning, a Boras police officer confessed: “It feels incredibly frustrating, almost hopeless. There are times when I think he will only stop when he kills himself or someone else.”

An incident last November involved a roadside sobriety check where the man in question slowed as if to pull over, then sped up and nearly ran over a police officer as he drove away. Although prosecutors have tried in vain to put the man in jail, his offences of driving under the influence of drugs and alcohol are not enough to put him behind bars. Police even tried confiscating his car several times. But he simply buys another and carries on his merry way.

Newer PostPM of Iceland steps down, elections to take place in May
Older PostNorway and China ink oil development deal