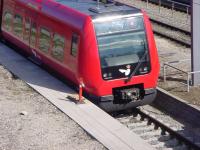 The Danish government is considering investing 90 billion kroner in public transport over the next decade, with a particular focus on high-speed trains. The goal is to get up to 20 percent of car drivers off the roads and into some form of public transport, ideally trains, according to an unreleased government report obtained by Berlingske Tidende newspaper.

The overall plan is centred on a high-speed train network that will be capable of travelling at 200 kilometres per hour between Copenhagen and Aalborg. This will require a complete 22 billion kroner overhaul of Denmark’s present train signalling system.

An additional nine billion kroner would go to build a double-track express route to ease train congestion in the crowded corridor between Copenhagen and Ringsted’s central Zealand junction. This new double track will let the high-speed trains zip through without being encumbered by slower regional transport.

The Copenhagen Post reports that the Danish government wants this new fast train service to be operational by 2018. It would, for example, reduce the 79-minute train trip between Odense and Copenhagen to just 60 minutes.

The second stage of railway development will happen after 2018 as it expands further into the countryside. Travel times between Copenhagen and Arhus will be cut to two hours and to Aalborg to just three hours.