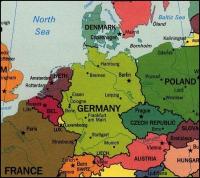 After a 15-year argument over who will foot the bill for a proposed bridge between Scandinavia and Europe, Germany and Denmark have finally reached a compromise and will sign an official agreement to seal the deal this week. The pending treaty will pave the way to build a massive bridge spanning the two countries by 2018, greatly expediting travel and trade.

The two nations have been at loggerheads for 15 years over who would pay for the bulk of this enormous bridge, but after a year of steady negotiations, Germany and Denmark are ready to sign an agreement. The proposed bridge will span the 19km gap between the German island of Fehmarn and the Danish island of Lolland in the Baltic Sea. The estimated cost will be EUR 5.6 billion (USD 8.2 billion).

Once the bridge is completed in 2018, train travel and driving times will be reduced between Copenhagen and Hamburg to around 3 hours. The treaty states that the bulk of the construction cost will be covered by Denmark, as the Danes will supposedly benefit more from the bridge. Although German Chancellor Angela Merkel supports the plan, many Germans along the coastal areas are opposed to it. They fear the bridge will steal jobs from local communities like the ferry industry, and environmentalists fear it will damage local ecology.