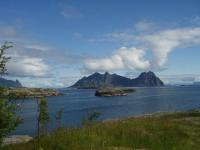 Despite the outcry from local environmental groups, the Norwegian energy authority has wrapped up a full seismic survey of the Arctic waters around the Lofoten islands, Reuters reports.

Oil companies predict large deposits of gas and oil under the seabed around the famously beautiful islands; but locals believe the natural beauty of Lofoten should be declared off-limits to exploration and drilling.

The survey, completed by the Norwegian Petroleum Directorate (NPD), produced a three-dimensional image of the seabed which will next be analysed by geologists to determine if there is enough oil and gas there to warrant drilling in this pristine area of Norway.

The Lofoten islands are a major source of contention between oil companies and conservationists. The oil companies’ resources in the North Sea are nearly depleted, so they are aggressively pushing for development of the seas around the Lofoten islands. Environmental groups, along with two-thirds of the centre-left government coalition, oppose drilling in the area.

Norway’s oil production has declined by 1 million barrels per day from its peak of 3 million barrels per day in 2000 as the nation’s North Sea oilfields reach maturity. The data gathered from the seismic survey will not be released to the public, and a final decision on whether the Lofoten region will be opened up for exploration and drilling will have to wait until after Norway’s general election in 2009.