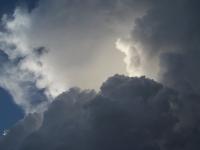 A powerful lightening bolt hit 91 fans as they watched a rallycross event in Norway on Sunday, sending 57 people to hospital with burns. Fortunately, no one was seriously hurt though several victims were asked to stay in hospital for observation, United Press reports.
The freak accident happened at a racetrack in the Norwegian town of Finnskog, 8km from the border with Sweden, where a rallycross national championship race was under way. Rallycross involves cars sprinting around a closed track for a predetermined number of laps. The lightening struck a hill next to the track where the spectators were sitting.
Local police officer Hans Eng told the Associated Press, “No one was seriously injured. But some of them will stay in the hospital for observation.” Eng said that three medical helicopters and 16 ambulances went to the scene at Flisa, ferrying injured fans to four different hospitals.
One witness, Roar Bringaker, said “I’ve never seen anything like it. Spectators fell off their seats. People got scared and ran. It was chaotic.”
Even Wiger, also watching the race with the 14 year-old son, related his experience. “It was raining and suddenly the lightening hit the stand. We all tried to get down from the hill. Many screamed and cried. The situation was dramatic. I’ve never experienced anything similar.”