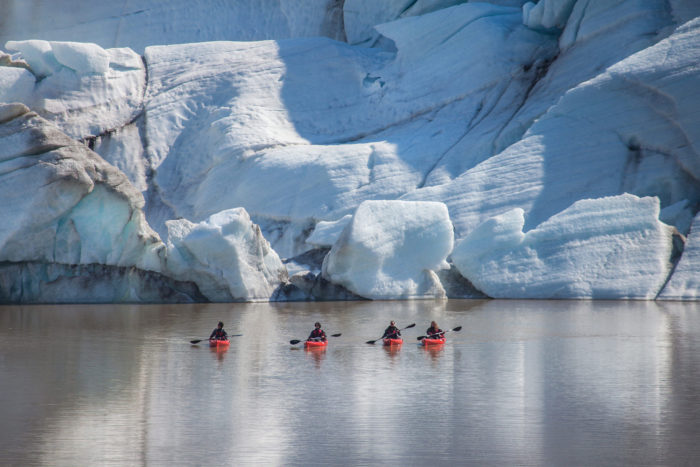 The rise of global temperatures and sea levels have resulted in glaciers melting at a rapid pace. Being a small island in the North Atlantic that is home to Europe’s largest glacier, Iceland is leading the charge in addressing the many issues arising due to climate change.

In Iceland, the climate crisis isn’t an abstract idea but a very real fact of life. One glacier has already been lost but Icelanders are doing all they can to fight back. Icelanders have always taken a lot of pride in the natural beauty of their country, wanting to share and protect it. A big part of sharing and protecting Iceland’s fragile environment is acknowledging the damage that has been done and coming up with ways to make things better.

Funeral for a Glacier

Okjökull (Ok glacier) was measured at 16 sq km (6.2 sq mi) around the turn of the 20th century but by 2012 had diminished to less than 1 sq km. This once massive giant lost its glacier status in 2014 when glaciologists determined that it was no longer an active geologic force but had become only a hunk of “dead” ice.

So connected are Icelanders to the nearly pristine island they call home that in August of 2019 some 100 people climbed Ok mountain to hold a funeral for the beloved glacier. A plaque was placed on the bare stone, engraved with a “Letter to the future” by the Icelandic author Andri Snær Magnason. The letter is a confession of humanity’s misdeeds that have led to this point of crisis, an acknowledgment that we know what needs to be done and that only future generations will know whether or not we succeeded.

Up to the Challenge

Living in Iceland takes a having a serious can-do attitude and Icelanders are up for anything, even the climate crisis challenge. With actions big and small, Iceland is doing its part to make the changes necessary to mitigate and reduce the human impact on our environment.

Drink straight from the tap

If you’ve ever bought a bottle of water in Iceland, you know that shop assistants regularly remind customers that they can also drink water straight from the tap. Iceland has some of the cleanest (and tastiest) water on earth and filling reusable water bottles is highly recommended and encouraged, even by the shops selling bottled water.

And where do all those water plastic bottles end up? Not in the highlands, ocean or landfills if they are disposed of properly. Icelanders are serious about their recycling and most businesses in Iceland have receptacles both for trash and recyclables. Even the street garbage cans have special compartments for recyclable bottles and cans.

There are real benefits to being a highly geothermally active island. Yes, it means there are lots of natural hot springs to soak in and almost every town can have a swimming pool, but it also means that all that geothermal activity can be transformed into electrical power. Geothermal energy provides 66% of Iceland’s energy and as of 2014 85% of the energy used in Iceland came from renewable sources.

Believe it or not, some of the produce you’ll find in Icelandic grocery stores is locally grown. Powered by sustainable geothermal energy, Icelandic greenhouses are able to grow a variety of fruits and vegetables including tomatoes, kale, cucumber, carrots, potatoes, cauliflower and even bananas. These homegrown fruits and veggies help reduce the need for imported produce and the accompanying carbon footprint.

Many businesses in Iceland are already on board the carbon neutralizing train, committing their time, money and energy to offsetting and reducing their carbon footprints. One way they do this is through reforestation projects. Most of Iceland was deforested with the arrival of settlers over 1,000 years ago which makes reforestation of the island a top priority. Supporting the island’s native plants goes hand in hand with reforestation. Planting endemic plant species is an efficient way to carbon neutralize while also supporting native wildlife.

In the movement to preserve the Icelandic wilderness, the Leave-no-Trace code of ethics has gained many followers in Iceland. The basic sentiment of the principle is to leave no trace of yourself when you visit wild places. National parks, campgrounds and most outdoor outfitters and guides support and follow the principle, leading the way in educating the public on ways they can both enjoy and help protect Iceland’s delicate ecosystems.