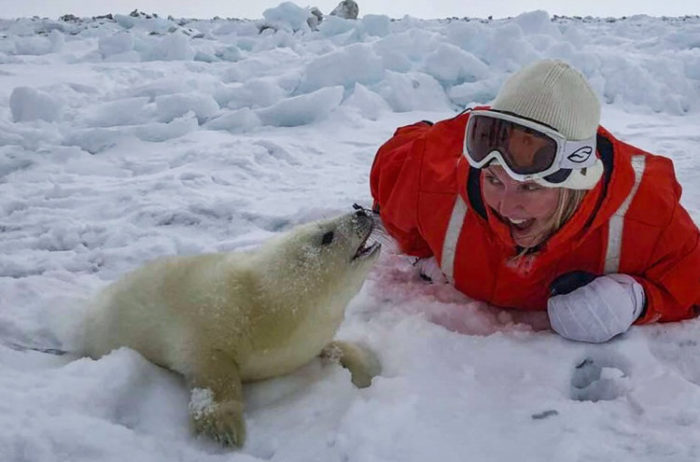 Whale watching is a well known part of High North tourism, where thousands sail out each year from various ports in the North Atlantic hoping to see the majestic giants. Seal tourism on the other hand is a new concept for most. Still, in Canada such an exclusive travel opportunity has been available for a long time, giving a few lucky travellers the chance to experience newborn baby harp seals in their natural environment on Arctic ice.

Everything about this opportunity is limited. It is only possible over a period of three weeks in the midst of winter, and there are less than  a handful of places on the planet that realistically can accommodate such seal tourism. Les Îles-de-la-Madeleine, the Magdalen Islands in the Canadian Arctic are one of those very few places.

The islands lie close to one of the world’s major harp seal birthing grounds and for the past 35 years a sole group, Château Madelinot  has operated seal-watching trips by helicopters out to the ice-fields from their deluxe basecamp during the short seal-watching season. Visitors come to see the seals from all over the world, especially from Japan, and perhaps in sync with the same migratory pull of the seals’ annual return, many tourists return frequently themselves.

Harp seals are extraordinarily migratory. The northwest population regularly moves up to 4,000 kilometres outside of the breeding season.  Estimates as to the global population vary. According to Fisheries and Oceans Canada (a department of the federal government) the Northwest Atlantic harp seal population (2016) “is healthy and abundant with an estimated population of 7.4 million animals, almost six times what it was in the 1970s”.  Other major harp seal birthing grounds are most are virtually inaccessible to humans, such as one off the coast of Newfoundland and Labrador, a second on the “West Ice” off eastern Greenland, and another on the “East Ice” of the north coast of Russia in the White Sea.

Read more about this opportunity to gain insight and experience Arctic wildlife here in Hugh Wilkinson’s story of the most unusual family vacation to  Les Îles-de-la-Madeleine to see the baby harp seals.

Newer PostThird Pole glacier melt impacts ~20-25% of Earth’s population
Older PostNorthern lights season is upon us, top tips to find them and take a picture