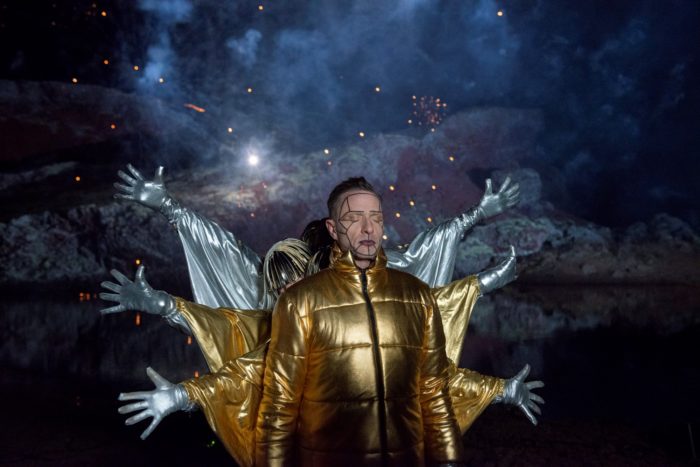 Director and Video Artist Kitty Von-Sometime have joined forces with GusGus for the music video Fireworks, the video premieres on the 13th of May at 17:00 (GMT).

Kitty was commissioned by choreographer Unnur Elísabet Gunnarsdóttir for her project “Ég býð mig fram” (I volunteer) and extended the collaboration to involve GusGus. With the help of Hero Productions in Iceland they produced the video for Fireworks shot in the stunning Icelandic countryside. Kitty and Daníel have a child together from a past relationship and it is the first time they worked together on a commission.

KITTY VON-SOMETIME:
Most known for her female empowerment series The Weird Girls Project, which has received global critical acclaim, Kitty has been sponsored and commissioned to create art in Iceland, Europe and Asia. This includes public light installation – such as the work inspired by the bioluminescence of deep-sea jellyfish for Reykjavík City, and installation and painting at the Swatch Art Peace Hotel. In addition to directing and producing other music videos, Kitty has produced 2 solo performance art films.

GUSGUS:
The single FIREWORKS is from GusGus’ 10th studio album ‘Lies Are More Flexible’. With a career spanning over two decades, the band’s production output has explored a diverse array of possibilities within the electronic music sphere, with a rotating cast of members and a patchwork of different themes, all the while maintaining the highest quality. This latest LP is the first studio album release from Gusgus since their 2014 hit ‘Mexico’, with the four years between spent touring the globe while honing their sound through self-released demos and remixes.