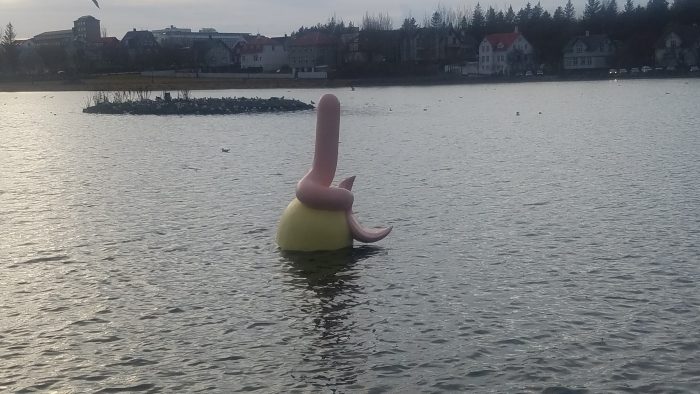 Locals and tourists in Reykjavik found a little surprise when walking around Tjörnin (the city centre pond) after Friday night. As part of the Cycle Music and Art Festival, an art piece, ‘Hafpulsan’ by Steinunn Gunnslaudóttir, which has certain phallic resemblances, has temporarily been installed to commemorate Iceland’s 100th year as a sovereign nation. 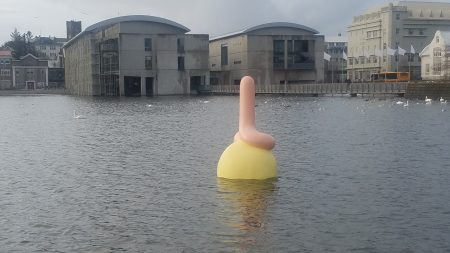 ‘Hafpulsan’ has been dubbed as The Mersausage, but its name is a mix of the Icelandic words hafmeyja (mermaid) and pulsa (hot dog). “It’s a hot dog that is sitting like a mermaid on a little bread roll out in the pond,” explained Steinunn. “It’s sitting tall and pleased with itself, but then it’s also a little mer-sausage in a pond, some kind of strange, handless creature that has no idea how powerful it is. It’s also a bit uncanny.”

The inspiration for Hafpulsan came from Steinunn’s earlier work ‘Democracy is a Hot Dog’ (Lýðræðið) in 2009. Another statue in Tjörnin pond holds a similar pose to Hafpulsan, called Hafmeyan by Nína Sæmundsson, which is a more conventional mermaid statue gifted to the city in 2014.

Tjörnin pond will host Hafpulsan until December, although Steinunn’s dream would be to have a bronze cast of the piece permanently.