Svala Bjorgivnsdottir is all set to represent Iceland at the 2017 Eurovision Song Contest in Kyiv with the song Paper. Excitement is mounting in Iceland because of the contest, which will take place on Tuesday 9 May. The rehearsals are well underway and Eurovision speculators and betting banks are going wild. Svala revealed her costume yesterday and explained that it symbolizes a victorious warrior, it makes her feel fearless and that the white represents light, hope and positivity. Svala’s Eurovision entry, Paper, is a very personal song. The song is about dealing with difficulties in life and overcoming them as she explains to her audience in the video bleow.

Svala is known for an extravagant dress code, and she’s used to the spotlight being on her for choice of clothing throughout her carrier, the preparations for the contest this year are no different.

Svala Björgvinsdóttir was born in 1977, she’s professionally known as Svala. She rose to fame with her 2001 hit song, “The Real Me”. Svala adopted the stage name “Kali” after forming the band Steed Lord, where she´s especially known to be creative in her choice of dress. Svala is the daughter of beloved Icelandic singer Bjorgvin Halldorsson who also represented Iceland in the Eurovision Song Contest when it was held in Dublin 1995. That is one of the very few times both father and daughter compete in the Eurovision Song Contest. Halldorsson performed the song NUNA and landed in 15th place.

In a press conference on 1 May attention for the dress code was shared with another contester. Svala wore clothing from Icelandic designer Hrafnhildur Arnardottir a.k.a. Shoplifter, from a line made in collaboration with clothing retailers & Other Stories. Surprisingly Denmark’s representative wore the same outfit, catching the media’s attention. 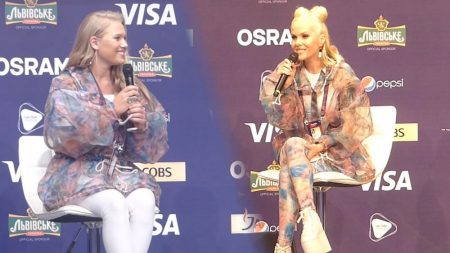 Image from Wigiblogs. Svala Björgvins and Anja both wear Shoplifter for the 1 May press conference

Newer PostOne might think summer has arrived in Iceland – But don’t be fooled.
Older PostRoads made from recycled plastic may be the thing to come in Iceland (VIDEO)