The deliberations to form a coalition government in Iceland were famously complex and drawn out after the October 2016 general elections. After many failed attempts from all sides the conservative Independence Party managed to form a majority along with two smaller parties, the center right Reform Party and the Bright Future. 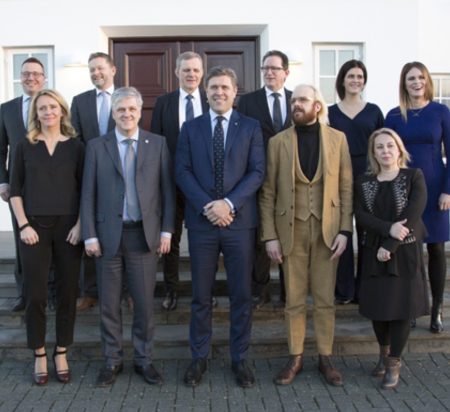 The Icelandic government after the 2016 general elections. Image is taken from stjornarrad.is.

The outcome of the general elections showed the Independence Party by far the largest party but The Left Green Party and the Pirates together had the same vote combined. Since the elections there have been harsh criticism on the Independence Party’s leader Bjarni Benediktsson regarding the holding back of some reports showing the assets of all Icelanders in tax havens abroad, including assets of Mr. Benediktsson’s family.

The reports were not released until after the elections and after the new government was formed and Prime Minister Benediktsson refused to discuss tax-haven report with Parliament and when he did he gave inconstant response.

The latest survey from the polling firm MMR confirms that the political sentiment in Iceland has taken a sharp turn to the left since the new government was formed and the disclosures in the reports were made public according to an Iceland Magazine report.

The Left Green’s now have the largest party, with 27% of voters pledging their vote in the survey. The Independence Party, polls at 23.8% while the other left leaning party, the minute Social Democratic Alliance, also increases its support from 7% in the last MMR poll to 7.8%. All parties on the center and right lose support between polls. The Restoration now polls at 5.6%, the centrist Bright Future polls at 5.3% and the center right Progressive Party that was party to the last government along with the Independence Party is now at 9.7%. The Progressive Party took a steep hit in the last elections after the Panama Paper leak and the scandals reveled therein. The Pirate Party’s vote remains the same in the survey, with 13.6% support. The Pirate Party had a prominent lead in 2015 and 2016 surveys, but the party only managed to secure 14.5% of the vote in the elections. Surveys show the support for the new right-wing coalition government dropping from 35.2% to 32.6%. Less than a third of voters now say they support the coalition government of the Independence party, The Restoration and The Bright Future Party.