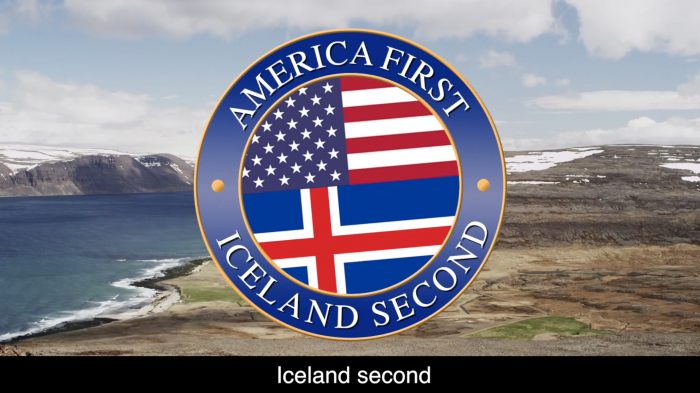 Iceland is the latest edition to the introduction or educational videos about European countries directed at the president of the United States, Donald Trump have taken the Internet by storm since his inauguration.

In the videos, each country speaks directly to Mr. Trump, acknowledging that America is great and should come first while talking up their own country, satirically convincing Trump that “he’ll love it” and suggesting that they come second.

Nutiminn news released a video on Iceland´s behalf, explaining what Donald trump would likely see as the greatness of the country, apologizing for Bjork and Sigurros, denouncing the female president and female Prime Minister as disastrous. Finally asking Mr. Trump to considering “Iceland Second”

The trend started with the Dutch new satire show Zondag met Lubach when the show’s host welcomed Mr. Trump onto the stage of politics and asked him to consider “Holland second” recounting all the things he would likely love about the country.

Many countries have since followed. Here is the initial message for Mr. Trump from Holland released on 23 January, “… Because we realize it’s better for us to get along, we decided to introduce our tiny country to him, in a way that will probably appeal to him the most.” according to the text accompanying the video on YouTube.

There are many more, Denmark, Finland, Luxembourg and Croatia have all added to the trend, which is rapidly spreading and reaching beyond Eurpe. China has made a version of the video message and with an addition from Iran, explaining the difference between Iran and Iraq and asking he president not to mix the two up and go to war because of an autocorrect on his smartphone, the satire takes the serious undertone to another level.

Newer PostReferendum on a new Faroese Constitution in April 2018
Older PostWARNING – The storm is moving to east Iceland!