President Guðni Th. Johannesson and his family welcomed the newest group of Syrian refugees accepted by the Icelandic Government to settle in Iceland at the presidential residency for a friendly visit. The five families consist of 22 individuals, nine adults and thirteen children. Preparations have been made for the families to settle in Akureyri and in Reykjavik. 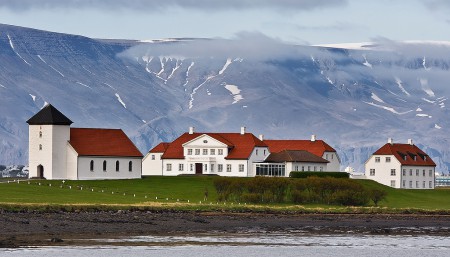 The families had been located in Beirut and were united with extended family members that have previously been received in Iceland in a joyful reunion. The group arrived in Keflavik and were taken to Bessastadir where the president, his wife and one of their sons greeted them with a handshake and welcomed them.

The President conveyed a view that Icelanders wish to show compassion, tolerance and to keep an open mind. “Icelanders cannot save the world. We cannot receive everyone fleeing their homes and powerful nations have to take action for peace in areas of war. But we can however do our bit by offering a secure shelter and by improving our society in showing compassion, tolerance and an open mind.” He went on to say that “In Iceland we defend human rights: gender equality, freedom of speech, freedom of religion, freedom of travel and last but not least freedom from fear. I welcome you with all my heart to Iceland.” he concluded. The town of Akureyri received 26 refugees in January last year and a family of five is likely to be received in addition after having been dislodged for the last four years.

Grapevine did a short summary on the asylums granted to refugees in Iceland, according to which Iceland has accepted a total of 584 refugees since 1956. According to another Grapevine report Icelanders are very content with their president, more so than in recent years and he steadily rises in popularity since his election last year. The personal reception of the refugees is already adding to this popularity judging by the expressions on social media among Icelanders. 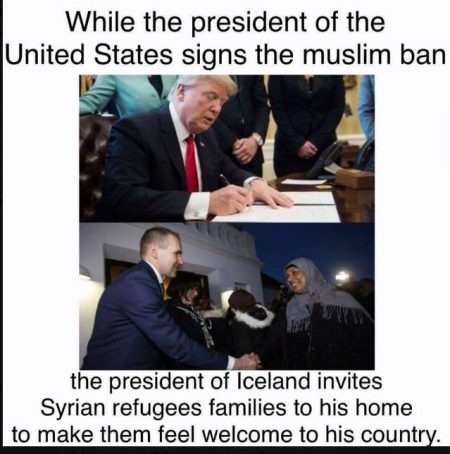 Social media meme comparing the presidents of US and Iceland