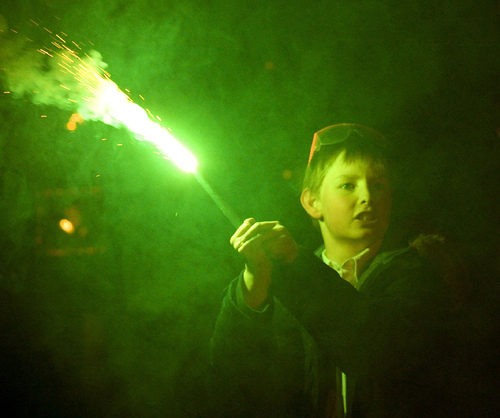 New Year’s Eve in Reykjavik is thought to be an experience, there are a few official firework displays in the city leading up to the main event but the real spectacle is at midnight when locals flock into the streets with bubbly wine and fireworks. The meet up on the hills in Reykjavik, on the grounds of the churches or simply in the streets and shoot their fireworks in the air simultaneously.

Traditionally locals start the evening with a festive family dinner, followed by a trip to a local bonfire where they meet up and celebrate with neighbors. From around ten to eleven the city streets go remarkably quite as majority of the nation gather around their TV sets to watch an annual New Year’s Eve comedy show broadcast by RUV the national broadcasting service, reviewing and ridiculing the major news stories and events of the year. About a half hour before midnight a brilliant display of fireworks is unleashed as the population of Reykjavik set off their fireworks. After midnight, the nightclubs and pubs remain open and the celebrations go on well into the morning.

Icelanders are crazy about fireworks and annually burn millions of kroners in spectacles in the air. The Fireworks a sale opened their doors on 28 December and is open until 6 January which in Iceland is officially the last day of Christmas.

The price of fireworks has generally gone down compared to last year, among other reasons due to currency fluctuations. The diversity of sales has also changed in recent years with a newish development, where private individuals have moved in on a marked that traditionally has belonged to the Search and Rescue squats of Iceland.

The Search and Rescue squats of Iceland, SAR are generally none for profit organisations that are on call responding in situation where people find themselves in peril in nature, be it at sea or in the mountains. The annual fireworks bonanza is their main source of income and many Icelanders justify their spending large amounts of money on fireworks with the fact that they are then supporting the SAR and thusly accumulate a grand display at midnight.